Via The Athletic: Leighton arrived at Bucs camp toda…

I guess toilets will have to wait. But I guess you c…

Here are the details as of right now:

The 2018 C-USA Tournament is underway from Frisco, Texas.

Below is the bracket, which will be updated as the tournament goes on. 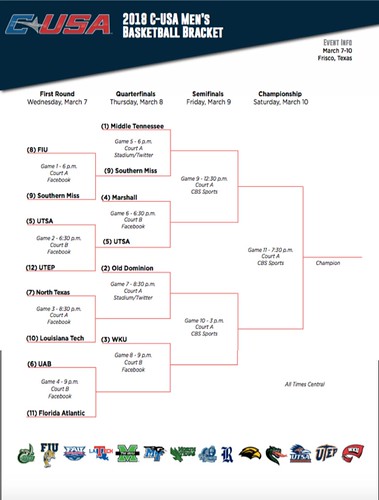 The first half of the opening round's games just concluded.

The Roadrunners surprisingly strong campaign continues to the Second Round after setting aside their Texas rivals. UTSA will take on the high-scoring Marshall Thundering Herd tomorrow.

Louisiana Tech vs. North Texas and FAU vs. UAB.

The biggest head-scratch of the 2017-2018 CUSA season has been Louisiana Tech. Despite their poor showing in the regular season, the Dunkin' Dawgs have the talent, the experience, and culture to make a run in the C-USA Tournament. Tech took that first step for a deep run with their win over the local team, North Texas, and will see Old Dominion in the Second Round

Blazers led for the entirety of the game, aside from the opening few seconds when the Owls had a 1-0 advantage. UAB will face WKU Thursday night in the Second Round, less than a week after UAB beat the Hilltoppers in Birmingham.


Here is the updated bracket going into the Second Round: 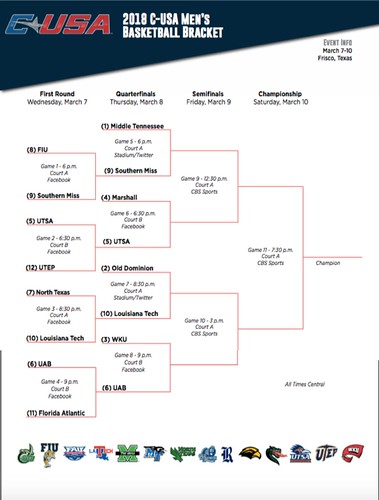 No. 4 Marshall topped No. 5 UTSA 95-81 in the quarterfinal round behind double-digit efforts from four players. The Thundering Herd will meet No. 9 Southern Miss in the first semifinal matchup at 1:30 p.m. Friday.
E-Mail: rickthendersonjr@gmail.com

Bolstered by hitting 13 three-pointers, Southern Miss pulled off the dramatic upset, knocking off top-seeded Middle Tennessee, 71-68, in overtime in the quarterfinals. The ninth-seeded Golden Eagles (15-17) will advance to face Marshall at 1:30 pm on Friday.
E-Mail: rickthendersonjr@gmail.com

Brandan Stith scored 14 of the teams final 19 points to lead Old Dominion to a 62-58 victory over Louisiana Tech in the quarterfinals. The second-seeded Monarchs (25-6) will advance to face WKU in the second semifinal at 4 pm on Friday.
E-Mail: rickthendersonjr@gmail.com

No. 3 WKU ran on all cylinders (57% FG) and silenced No. 6 UAB 98-70 Thursday night in the last quarterfinal game of the 2018 C-USA Mens Basketball Championship. As mentioned previously, the Hilltoppers have a Friday meeting with second-seeded Old Dominion.
E-Mail: rickthendersonjr@gmail.com

Being new to C-USA, is it typically a 1-bid or multi-bid league?  Sounds like many talking heads still believe MTSU will get into the big dance, meaning multiple teams from the conference make it.  That is going to be bad news for some P5 school.

There are 4 teams with 22 or more wins, so on the surface it would seem like more than 1 team deserves to go.

Typically one team as of late…I don't recall the last time C-USA had two teams in The Dance…
E-Mail: rickthendersonjr@gmail.com


In was in 2012, one of the final years of "CUSA 2.0." Both Southern Miss and Memphis made the tournament.
When I'm not in school, I'm schooling the CUSA Twitter game; Follow Me Here