Member since 2021
Hoping TJ's okay after that injury, brutal loss for the Owls. Meanwhile, the Hurricanes scratched across three more runs on Adrien Reese and the Owls are down 7-0 in the top of the second…

.@TJ_Stuart has left the game with an injury after just one inning of play, @adrien_reese23 comes in to replace him. 😕

Hoping it was nothing serious and wishing you the best, TJ! 🙏#UM 4 - #FAU 0 | T2 pic.twitter.com/UfIktKcznJ

Not a good sign when I'm sitting at a water side resteraunt and not at a FAU-canes  game. The canes will man handle our staff again. Unfortunately,  we don't have the arms to compete with high level teams.

Member since 2021
Nolan Schanuel now holds a share in the FAU home runs lead with four! What a season!

Member since 2021
Looks like Bobby Morgensen's leg is back to full health, what a catch!

We've got a football game!

Member since 2021
Nolan Schanuel brought home Alvarez with a sac fly, now the Owls gotta get five runs with one out in the top of the ninth.

Can Wilfredo Alvarez and the Owls get six runs in this ninth inning to force extras or take the win? We got this! 👊#UM 14 - #FAU 8 | T9 | @LealLaw pic.twitter.com/YL5e9lp1Gm

Member since 2021
Rally unsuccessful, Owls drop the second game in the three game series to #18 Miami:

Member since 2021
The FAU Baseball team has dropped their third game in a row, falling 14-9 to the Miami Hurricanes. The Hurricanes scored 12 runs in the first two innings to secure the victory.

The Owls will be back in action on Friday, March 26 against the Marshall Thundering Herd. First pitch will be at 5:00 p.m. and the game will be broadcast on C-USA TV. 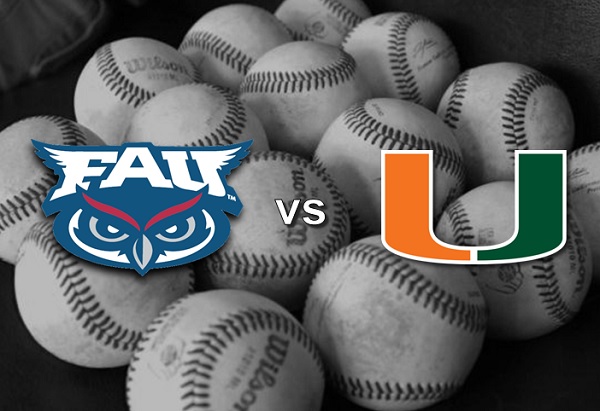 Series: The Hurricanes have stretched their all-time series lead to 66-19 following their two victories over the Owls earlier this season.

Florida Atlantic will close their regular season against a familiar foe: the Miami Hurricanes. The Owls have faced the Hurricanes a total of 85 times going into Tuesday's matchup, more than any other non-conference opponent in FAU program history.

The Owls head to Coral Gables having split a four-game set against then-No.19 Southern Mississippi. FAU won the opening and closing game of the series 3-1 and 9-6, respectively. Game Four on Sunday was especially dramatic as the Owls were down 5-1 in the seventh inning before scoring eight unanswered.

FAU landed the No. 5 seed in the upcoming C-USA Championship next week, and a first-round date with Old Dominion.

Miami completes their non-conference schedule with the Owls having one the previous two matchups 11-2 and 14-9, respectively.

The Canes have won five of their last six, including a sweep over Appalachian State and taking two of three from Georgia Tech. UM is currently third in their division within the ACC.

Christian Del Castillo leads Miami with a .377 average (third best in the ACC) while his younger brother Adrian is batting .305. The siblings have a combined seven homers and 75 RBI.
When I'm not in school, I'm schooling the CUSA Twitter game; Follow Me Here