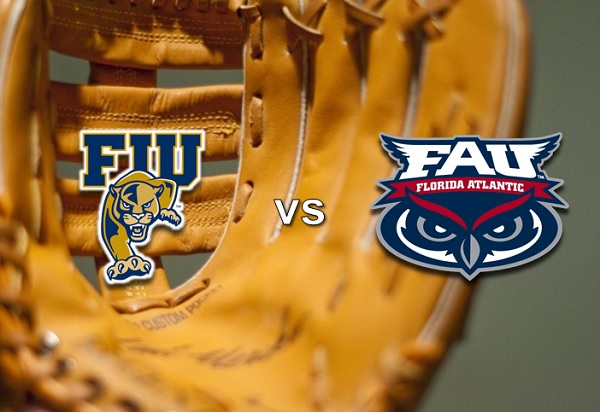 Looking to shake off a series loss to Old Dominion last weekend (0-14, 7-11, 5-4), Florida Atlantic evened things up with FGCU on Tuesday at home. Max Martzolf tossed his best appearance to date for the win, fanning 11 over 4.2 frames with no hits, no walks, and no runs.

In the box, Dylan Goldstein and Caleb Pendleton have had the hot bats for FAU over the last four contests with Goldstein stroking out a .462 mark fueled by six hits, two homers, and six RBI and Pendleton (photo below center) following with a .500 average with five hits, a double, and three RBI. 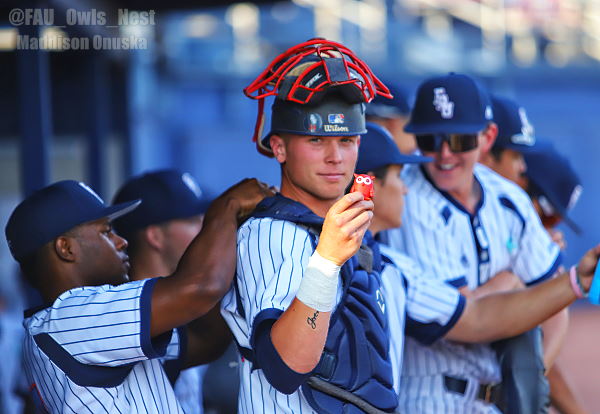 While the Owls are switching gears away from strong competition into the middle to lower pack in C-USA standings with the Panthers, it bears noting that this is a rivalry series, and anything can happen. Last season FAU took 3-of-4 twice over FIU in the back-to-back four game series matchups. However four contests saw one run differentials.

The Owls have been very fortunate on the weather front so far this season, but that streak may be in jeopardy this weekend. All three days show some shower activity, with the question being how it can be managed and when it will be falling.

The FAU Alumni Association is holding Alumni Day at FAU Baseball on Saturday. Anyone interested in attending under that offering can see the details here

Time may shift if Friday's contest is compromised and the need to move to a double-header action for Saturday is manifest. Last season the Owls played double headers in each conference series on Saturday's with start times at 2:00 PM and 5:00 PM respectively.

Gracing the bottom of the hitting and pitching ranks in all of C-USA, "having a down year" would be the best way to describe the 2022 FIU baseball team overall. When things appeared to be off to a great start at 6-0, they have strewn in only six more ever since and currently sit at a paltry 12-26 overall and 4-14 in conference play.

Ironically, one of Panther's league victories came against Old Dominion in blowout fashion at 13-3. Toss in a series victory against Marshall and one win against WKU and the remainder are accounted for.

In their final midweek matchup of the season, FIU rolled past Bethune-Cookman 7-1 for their 2nd victory over the Wildcat's this year.

FIU has no one hitting at .300 or better, but two players at very close in that of infielders Robert Sotolongo (.295) and Adrina Figueroa (.294). Outfielder Alec Sanchez claims five triples on the season for FIU, while also holding down the most RBI (32) and total bases (85).

Not much to say about the Panther's weekend starters at this point as two still remain to be announced, but they will move RHP Patrick Pridgen up to the opening role after seeing the Saturday slot last weekend. Pridgen is 2nd in C-USA in strikeouts (82) and sits 8th nationally.

Providing the bats return, the Owls should have a festive amount of runs this weekend because outside of Pridgen there isn't a whole lot of shutdown potential looming.

Game Time moved up a bit tonight to manage the threat of weather, and have already had one lightning delay. Hopefully that is it though.

Friday Rivalry! #FAU vs #FIU is set for first pitch @FAUBaseball Stadium. Tonight's 📸 are brought to you by @diemer_sarah . #GoOwls 🦉⚾️🧢 pic.twitter.com/ujAD12lbZK

Well, Pridgen doing Pridgen things, three strike outs to end the Owl side the bottom of the first. FIU sends one over the wall to lead 1-0.

The Panthers deliver a solo homer to take the first nark on the scoreboard. @FAUBseball looking to answer. #GoOwls 🦉⚾️🧢 pic.twitter.com/hw6rLV6hHo

Owls are set down for the second straight inning in order. Panther starter Pridgen with 6 k's already. Time to get it going! Let's #GoOwls 🦉⚾️🧢 pic.twitter.com/InWkU4KlJy

Schanuel drives in the Owls' first run of the game to tie it up:

Top 5th: #FAU 1 #FIU 1@NSchanuel sends an RBI 1B into shallow right to plate @Bose4J! Hunter Cooley strikes out 2⃣ Panthers, and @CalebPendleton9 guns down another in the 4th. All tied up at @FAUBaseball Stadium! #GoOwls 🦉⚾️🧢 pic.twitter.com/jr5mXnHKSs

Albert serves up a single to lead-off the frame, and the Owls' patience pays off for a two run lead

The 🌧️ comes down for a spell, but no delay 👏But @FAUBaseball works 4⃣ walks to plate two runs and take the lead in the bottom 5th! #GoOwls 🦉⚾️🧢 pic.twitter.com/LxWYB3Ylmw

The Owls are up to 8 walks on the night, and use that strategy combined with a Rincones RBI to widen the gap:

Top 7th: #FAU 4 #FIU 1@GaBeRincones delivers an RBI 1B to expand the lead to 3⃣ Runs! Hunter Cooley out for another inning of action on the mound. #GoOwls 🦉⚾️🧢 pic.twitter.com/SR3ayyxxM8

Goldstein delivers another BOMB, DeBose adds a run on for good measure, and the Owls are cruising along:

A Panther walk and infield single are set down by a 6-4-3 DP from the Owls. Dylan Goldstein GOES YARD and @Bose4J drives in another to make it a FIVE run game! #GoOwls 🦉⚾️🧢 pic.twitter.com/rgpb0yIHgg

Lock it UP! Game One goes the Owls way - with no meaningful weather impacts and another complete game performance from Hunter Cooley: 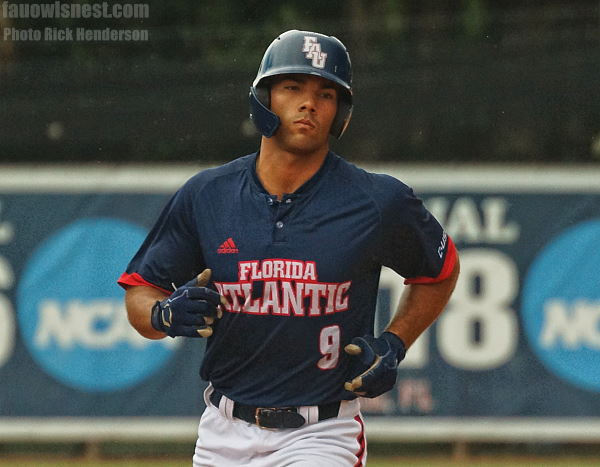 The Panthers evened up the series on Saturday with a 6-4 win at FAU Baseball Stadium.

The Owls would get on the scoreboard when Gabe Rincones hit his first of three home runs in  the game.

Unfortunately no one was on base for any of them.

FAU pulled within within a run 5-4 late but closer Robert Wegielnik was touched up for a run in the panthers final trip to the plate, expanding the deficit to a pair of needed scores.

FIU made a highlight grab in right center field in the bottom of the 9th robbing Jackson Ross of a likely triple.

Still, back-to-back hits put two on for Shane Magrann and Jalen DeBose, however neither could not capitalize.

His reliever Sam Drumheller had his best outing of the season, tossing four frames with just one hit while setting down two Panthers.

Florida Atlantic (27-17, 12-8 C-USA) has only used four pitchers in the series, and will have a nearly full pen for the finale should it be needed.