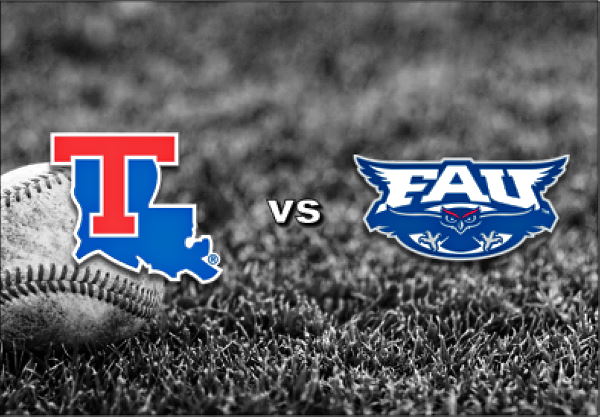 The Owls are entering the final stretch of the 2022 regular season, with the Bulldogs, Charlotte, and Marshall left over the next two and a half weeks of action.

Florida Atlantic is currently in sole possession of 3rd place in C-USA, just behind LA Tech, who is also tied with UTSA for 2nd with 14 wins to the Owls' 13. Obviously a series win, or even sweep, would do wonders in jockeying for seeding opportunity in the Championship.

The Saturday starter for FAU continues to be a moving target given results and will once again remain TBA. Jacob Josey suffered another setback last weekend, and that could promote another trial with Tibur Rivero, who has not seen any action since April 16th's 9-3 win against Western Kentucky where he faced five batters and recorded only an out before giving the ball over Marc DeGusipe to finish the game out.

Head Coach John McCormack (photo below) had last indicated that Rivero would be working on mechanics and only available out of the bullpen until further notice. With limited choices elsewise, that notice may be soon. 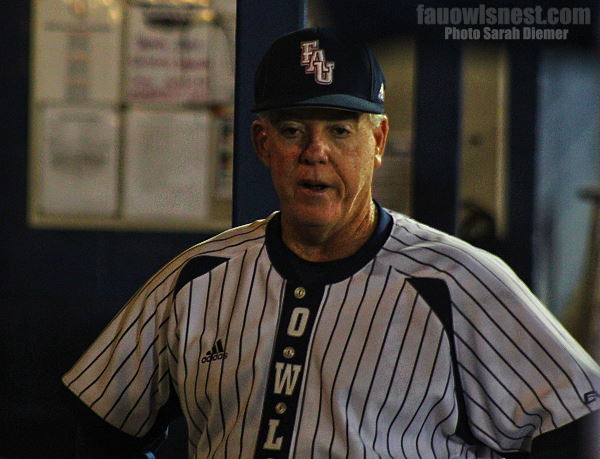 FAU will head to Ruston, LA holding a .280 to .250 edge at the plate, but that is effectively counterbalanced on the bump where the Bulldogs make up for it by nearly a run per game. The series will be a challenge as it is on the road in one of the league's most supportive environments, although it appears to be a relatively even match overall and can very well go the Owls' way if they perform up to their capabilities in both facets of play.

It's a bit difficult to stake a claim on what is most important for the weekend, but hitting would appear prevalent as pitching is strength for LA Tech at large and runs win the game when it is all said and done.

To aid in that endeavor, left fielder Dylan Goldstein continues to be hot, and right fielder Gabe Rincones, who swatted three homers in the Owls' only loss to FIU last weekend, are continuing a welcomed comeback to the top portion of the lineup.

Louisiana Tech bounced back from a 5-0 series-opening loss at Old Dominion last Friday night to take the final two games of the series in double-up fashion 10-5 and 8-4 while improving to 14-7 in league play.

More recently, the Bulldogs are coming off two mid-week contests against in state foes, taking down Louisiana Monroe 11-5 behind a five run eighth inning on Tuesday before following that up with a 4-3 win over a pesky Northwestern State club on the road Wednesday night.

As a team, LA Tech is ninth nationally in strikeout to walk ration at 3.33, and are led by RHP Jonathan Fincher (22nd , 7.00). Tech RHP Kyle Crigger is tied for the lead in C-USA and ranks 16th nationally with 10 saves on the year. He needs just three more to establish a new program mark.

Bulldog right fielder Steele Netterville has gone 8-for-18 in the last our games while driving in nine runs with a homer to retain the team lead (12). With a number of games still yet to play, Netterville still sits tied for the program record in doubles with 57.

Senior shortstop Taylor Young leads the conference with 63 runs scored (3rd nationally) and is atop C-USA in walks (43) and on-base percentage (.502). 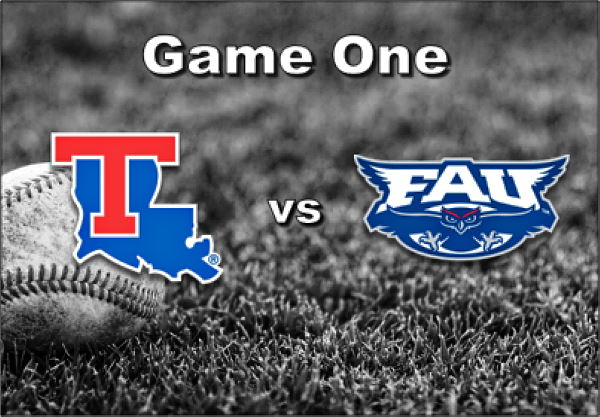 Important series for Florida Atlantic is underway on a perfect night in Ruston, LA.

The Owls are set down in order for the first time in a spell during their initial trip to the plate, however Hunter Cooley does the same in likewise fashion - which is surely welcomed given his last two starts.

Nothing doing for either team at the plate, as both are set down in order once again.

Cooley has tossed just 20 pitches, with 15 for strikes.

Moving right along, LA Tech gets the game's first hit but that's all the action so far.

The Owls STRIKE FIRST as Dylan Goldstein serves up an RBI single that plates Gabe Rincones.

Hunter Cooley fans two Bulldogs to work away from another LA Tech single.

Florida Atlantic roughs up Bulldog starter Cade Gibson, and sends 12 batters to the plate in the bottom half of the 5th, which is highlighted by Tyler Kelder's solo shot to left field. That makes his fifth home of the year for him and the 65th for the Owls overall.

Goldstein (1B), Jackson Ross (1B), Steven Loden (HBP), Kelder (BB), and Caleb Pendleton (2B, 2RBI) add a total of six more runs as FAU has set themselves up with an 8 spot cushion.

The Owls scored five of the runs with two outs, and LA tech is on their 3rd pitcher of the night.

Meanwhile, Cooley continues to deal - setting down the Bulldog side in order as Nolan Schanuel makes an athletic catch at the sideline fence for the final out.

Nolan Schanuel reaches on a Bulldog fielding error for the Owls, but is left on base.

Cooley works out of a two-on two-out jam as Loden snags a liner to right, and has thrown just 74 pitches through six complete with 81% of them being for strikes.

Kelder connects for a two-out double, and is brought home by Pendleton who now has his 3rd RBI of the game.

The Bulldogs net another single in their turn, but Cooley picks up his 5th in back-to-back fashion to keep them off the board.

FAU has 10 hits to Tech's five, and have scored eight of their nine runs with two away.

Goldstein swats his 14th homer of the year for the Owls.

After significant time away, Mitch Hartigan makes a return at right field and chases one down past the foul line for an out 👀

But Tech plates two with a two out double to avoid the shutout. 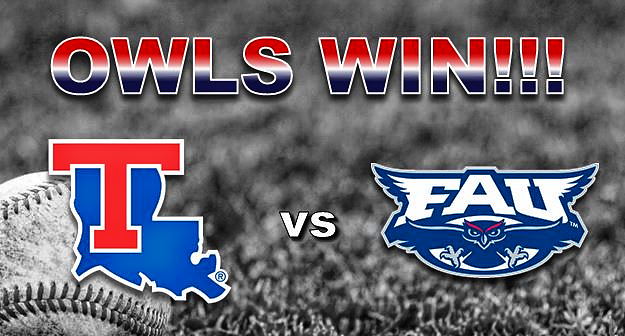 Marc DeGusipe comes in for Cooley in the 9th and strikes out two Bulldogs to close it out, as FAU gets a H-U-G-E 10-2 Series Opening WIN!