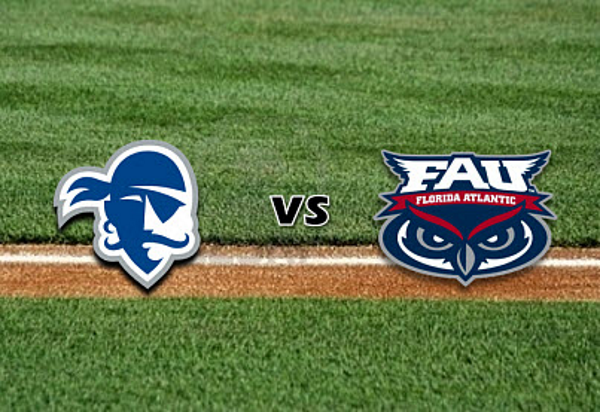 Series: FAU owns a 6-2 all-time series advantage, with every game being held in Boca Raton. The Owls have won every series against the Pirates, including a sweep in 2018.

FAU Baseball heads back home with a 3-1 record following a win across Alligator Alley at FGCU. The Owls were led to victory by Bobby Morgensen's two-run home run that put the Owls up 3-1, the score they would ultimately win by. Following a bases-loaded scare in the ninth, Mike Entenza slammed the door on the Eagles for good to clinch the win.

Before that, the Owls took two of three from the formerly 24th ranked UCF Knights. FAU Coach John McCormack will go will count on the same three starters from the UCF series for this series against Seton Hall.

Jacob Josey will take the mound to start Game One after a solid Opening Day performance. Josey went five innings and struck out six batters, allowing four hits, two walks, and one run.

Javi Rivera has the ball for Game Two on Saturday after a high-scoring affair in his Division I opener.  The Indian River State College transfer went 4.1 innings, struck out five batters, walked five batters, and allowed four hits for five runs.

Matt Sparling will start in the final game of the series on Sunday after pitching five innings for three hits for three runs against UCF. He paces FAU's starting pitchers with six strikeouts.

Nolan Schanuel was named C-USA hitter of the week following his stellar at-bats in the weekend series against UCF. The freshman first baseman hit 8-16, including a home run in his second game plus eight RBIs.

Caleb Pendleton also made national headlines by hitting a grand slam in each of his first two collegiate at-bats, with both of those at-bats coming in the second inning of the Owls' 20-15 Game Two victory over UCF. Pendleton was the eighth player in college baseball history to hit two grand slams in the same inning, according to ESPN, who played The Owl's Nest's video of the slams on SportsCenter.

The Seton Hall Pirates enter this series with a 1-1 record after hosting a split doubleheader with Hofstra on Sunday. SHU came away victorious in Game One with a 3-2 result in a seven-inning contest. The Pride spoiled the Pirates' hope of a sweep with their own 3-2 win in a full nine-inning Game Two.

Before COVID-19 brought the sports world to a halt in the Spring of 2020, in the Pirates owned a solid 6-8 record. This includes a 17-1 thrashing of Milwaukee and a 10-2 thumping of Illinois. The Pirates had a record of 5-8 outside of their friendly confines of South Orange, NJ, including a pair of wins on a neutral site.

Outfielder Tyler Shedler-McAvoy returns to SHU as Big East Preseason Co-Player of the Year. This follows up an all-conference selection following the shortened 2020 campaign in which the New Jersey native hit .304, including a pair of triples, and stole seven bags. The grad student is currently 2-6, which includes a triple already recorded under his belt.

The Pirates were selected to finish third in the Big East behind UConn and Creighton. SHU was the only other program outside those two to have received a first place vote in the Big East Preseason rankings.
When I'm not in school, I'm schooling the CUSA Twitter game; Follow Me Here

The Series is officially sold out!

Wow sell out after sell out. Baseball deserves more investment than basketball at this point

They should double the availability.

Member since 2021
The Owls are set to take on the Seton Hall Pirates in just under an hour and the starting lineups are set.

Jacob Josey was slated to start tonight but is "day to day" with an undisclosed injury.

I really like Seton Hall's Tyler Shedler-McAvoy. He's my type of ball player; a Keven Keirmaier style speedster in the outfield and along the base paths. Should be really interesting to watch.
When I'm not in school, I'm schooling the CUSA Twitter game; Follow Me Here

Member since 2021
We're underway from Paradise. Some late-breaking news: Jackson Spiller got the start on the mound over Jacob Josey, who is listed as day-to-day with some tenderness.

JUST IN: RHP @JacksonSpiller will start on the mound in Game One vs. #SHU. Spiller gets the nod over Jacob Josey, who's listed as day-to-day. First pitch from #FAU is just moments away. #GoOwls 👌 pic.twitter.com/5EfIUIiFJk

Member since 2021
Jackson Wenstrom ties the game with an absolute laser. I wouldn't be surprised if that ball is still in orbit and on its way to New Jersey.

.@jackowenny with a MOON SHOT 🚀 The two sport athlete goes yard for the Owls first run of the night.#SHU 1 - #FAU 1 | B3 pic.twitter.com/FNkeKbSU7S

Member since 2021
The Owls put together a FIVE run sixth inning to put themselves up 6-1, including an absolute bomb from Bobby Morgensen.

Never thought I'd see the day where FAU is in the nation's top ten for homers.
When I'm not in school, I'm schooling the CUSA Twitter game; Follow Me Here