When we play fellow Florida programs that are establ…

Let's be realistic.The UM and UCF games were sold out…

Member since 2021
FAU Heads to Charlotte for first Conference Series 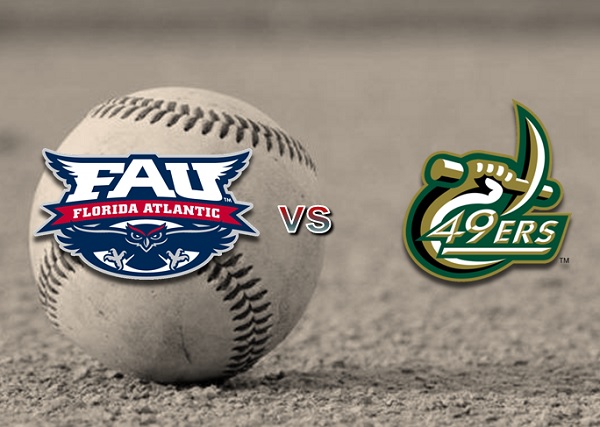 Where: Robert and Mariam Hayes Stadium

Series: The Owls own a 16-4 all-time series advantage over the Charlotte 49ers, with a six-game winning streak going into the weekend series.

The Owls are on a hot streak yet again. After starting conference play with a four-game sweep of the Marshall Thundering Herd, the Owls took down the FGCU Eagles with a herculean comeback win on Tuesday.

DH Jared DeSantolo was the MVP of last week's series, as he had a huge walk-off hit in the second game of Saturday's doubleheader, then hit a home run and added two RBIs.

OF Victor Castillo could be another player to look out for as a guy who could get some chances off the bench. He had five RBIs in FAU's comeback win on Tuesday, including the grand slam that got the Owls back in the game.

The 49ers have started the conference season on a good note, winning three of the four games they played against the Western Kentucky Hilltoppers last weekend.

Last time out, Charlotte lost 17-10 in an extra-innings thriller, backed by a six RBI performance from WKU 3B Matthew Meyer. Charlotte's starting pitcher, Andrew Lindsley, gave up four runs without recording a single out before he got pulled from the game.

Freshman infielder Nate Furman also powered the 49ers offense on Sunday. He hit 2-3 with 3 RBIs. He is 4-9 with 9 RBIs on the season.

This will be a bigger test then Marshall. Charlotte  had improving every year. They are a solid team. Pitching and hitting. We need to play good this weekend.

Very nice: 4 starters actually listed for us, which I think is the first time this season.

Not so nice: their ERAs.

I still believe in this staff for the course of the season. We can do big things - especially with the loaded lineup and depth.

Charlotte is better than usual this year. RPI of 46. Should be a fun weekend series!

Member since 2021
Hunter Cooley has been arguably the most consistent starter in FAU's rotation this season. Let's see if he can stay hot tonight and get the Owls a win.

Hunter has been solid this season. This balll club must score early and often to have a good weekend. Charlotte is a good team.

Member since 2021
Go Owls! Let's see if this new-look top half of the lineup can get the job done. Should be interesting to see Mitch in the 2-hole.

Wilfredo Alvarez takes a ball to start the at-bat and were UNDERWAY! 👌⚾️

Member since 2021
Nolan Schanuel and B.J. Murray get things started with RBI base hits, Austin Knight gets the 49ers on the board with a home run, we've got ourselves a ball game here.

These two STUDS get the Owls on the board and give them the lead! 🔥@NSchanuel and @BJMurray14 get back-to-back RBI hits and FAU is off to the races! 💨#FAU 2 - #UNCC 1 | E1 | @LealLaw pic.twitter.com/BMTPcpIHIa

Well, we did start well, but that 5 run fourth is a killer.
E-Mail: rickthendersonjr@gmail.com