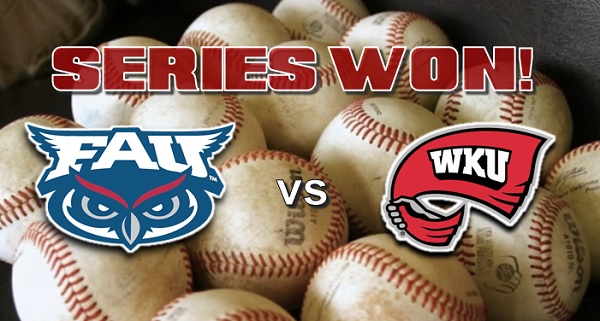 The FAU Baseball team is now one step closer to securing a spot in the C-USA tournament, finishing off the WKU Hilltoppers with two victories today. In game 3, they came back in style with a big three-run double by Nolan Schanuel in the ninth, winning 6-3, while the bullpen was the story in game four. The Owls opted to use an opener in Brock Helverson and the decision paid off, with the Owls taking a 6-1 victory.

"It's hard to even quantify it, he's been really, really good. It's the old adage, the stuff is just good, but the amount of strikes he throws is really good. For a young guy, who we've put in a lot of tough situations, for him to not get overwhelmed has been amazing. I'm happy he's with us, I'm happy he's here, and we're going to keep using him." -Head Coach John McCormack on Sam Drumheller's impact.

The Owls will return home for their final conference series on Friday, May 14 to face off against Southern Mississippi. The game will start at 5:00 p.m. and will be back on C-USA TV.

@Colby guy, you've  done an outstanding job covering FAU  baseball. I know it isn't as popular as football, but this old baseball guy has appreciated your coverage. These young arms give me hope for what's coming.

I second Local. I love baseball and this has been fantastic coverage. Job well done and thank you!

Colby Guy:
Thank you so much for the great coverage of FAU baseball.
I enjoy following the game from your perspective.
Keep up the good work.

The 2021 Air Force Reserve C-USA Baseball Championship will return to campus, with Louisiana Tech hosting the event at the brand new Pat Patterson Park in Ruston.  The Championship will feature the top eight teams in regular-season league play (top three finishers in each division and the teams with the next two best winning percentages).  The format consists of two double-elimination brackets, with a single-elimination championship game that will be nationally-televised by CBS Sports Network.  All other games will be on ESPN+.

Looking at the stats, there are three top dogs and three under dogs. First time in a long time we are in the under dog group. But anything can happen

CONGRATS to #FAU 2B Steven Loden on being named #CUSA HOTW! Loden notched a .529 AVG with 3 multi-hit showings vs #WKU to help clinch the Owls' 2021 Tourney appearance. #OwlsUP Steven 👌 pic.twitter.com/jgBkF0YJpC