OWLS WIN! What a comeback! ARE YOU NOT ENTERTAINED!? 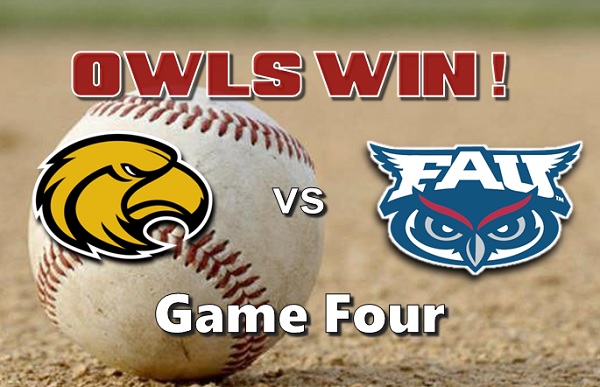 Florida Atlantic flipped the script on #19 Southern Mississippi, scoring a combined eight runs in the Owls' final two innings. The Golden Eagles had a 5-1 lead heading into a brief rain delay in the top of the seventh, but it was all Owls once play resumed.

Here is The Rundown from today's comeback victory.


FAU Head Coach John McCormack said "Dante (Visconti) with the 2-0 count and then getting out of it, and Jackson (Wenstrom) hit the home run, that really infused the team and made them say 'hey, we could do this!'"

The Owls will play their final regular season game on Tuesday against the University of Miami.

Nice to have a win like this . The guys never quit.

Absolutely Local. And that's something that Coach Mac later said.. These guys love each other and FAU, so they'll fight to the end.
When I'm not in school, I'm schooling the CUSA Twitter game; Follow Me Here