I feel like Christmas came early with the release of Taggart.… 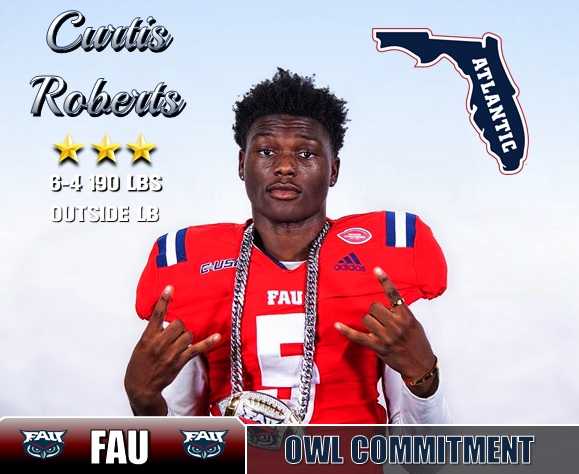 Florida Atlantic's class of 2023 reached double digits on Saturday with the addition of impressive Clearwater Catholic standout Curtis Roberts. Linebackers Coach Raymond Woodie, along side Head Coach Taggart, were the primary points of contact for the talented outside linebacker who received his FAU official offer back on March 5th.

And they beat out a plethora of other schools for Robert's services, as he is credited with over 20 outstanding offers, including Mississippi State, UCF, Kansas State, Washington State, Cincinnati, Michigan State, and other P5 programs.

"The Owls' staff had already been recruiting me heavy for a while, so when I visited campus and saw it with my own eyes I knew those guys were building something special", Roberts said of his recent trip to Boca Raton. "I had a Great talk with Coach Taggart, and all I can say is hes a wise man."

A multi-positional player, Roberts has also seen time at defensive end, and also wide receiver. He also competes in track for the Marauders, specializing in the long jump, and says he plans to try out for the baseball team this season as well.

His 2022 junior highlight tape is below:

Roberts will join the other members of the current 2023 class listed below:

Wow. Probably one of the biggest fish we have ever landed by pure offers. Taggart and crew really building a roster for the future.


Agreed. I like the team Taggart is putting together. This team will have enough talent to compete in the AAC.