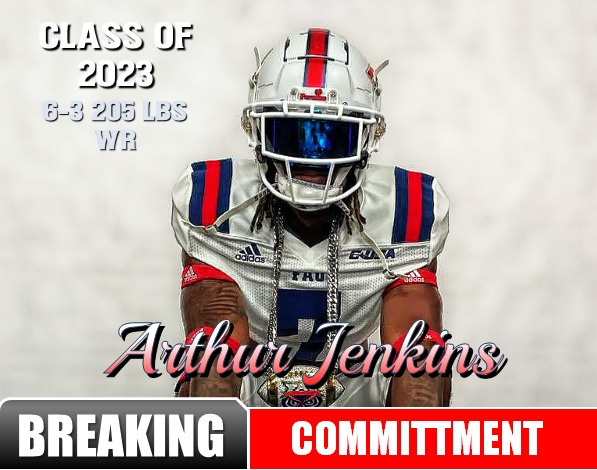 Deerfield Beach prospect Arthur Jenkins announced his pledge to FAU's Class of 2023 tonight via social media. Jenkins is a long receiver who currently has amassed 230 yards off of 16 hauls through six games for the Bucs, two of which went for touchdowns.

He visited FAU unofficially back on September 18th for the Owls' contest against Fordham.

"I chose the Owls because they made me feel like family" Jenkins said. "Most importantly they showed me mad love".

After speaking with a number of other prospects, and current commits, this is a familiar set of replies amongst them.

"The atmosphere was amazing", Jenkins said of his recent visit to see the Owl set down the Rams.

Those familiar with Jenkins inside the program had this to offer about his decision:

His versatility, along with his size and athleticism makes him an outstanding prospect. Will be recruited by numerous Power-5 programs before his recruitment is over. A huge get for the Owls, and it's an indication of the prominence the football program is quickly gaining.

Wow. Speaks volumes to what the recruits and locals think of Willie & Co.! Roll Owls!!!