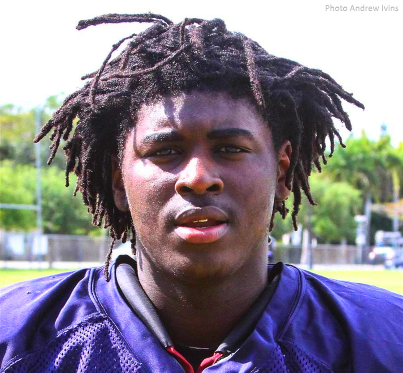 Despite Covid-19 forcing college coaches into another dead period, FAU coaches have still remained hard at work recruiting as best they can from the confinesfrom their homes.

This work has led to FAU landing their first commit of the 2021 recruiting class in Miami Palmetto defensive end Dwight Dassaw.

The three-star prospect, who visited FAU for their elite junior day on March 8th, was impressed with FAU's campus improvements.

''I love the new facility and just how everything on campus is laid out,'' Dassaw told FAUOwlsnest via phone call.

Dassaw (photo above) posted nine sacks as part of arguably the most talented high school defenses in the country, one that features four Under Armour All-Americans.

"Competing with guys like Savion Collins, Jason Marshall, Corey Collier, Lenord Taylor, and Derrick Edwards every day definitely makes you come and compete at your best every day.''

"Coach Taggart and coach Woodie did a great job telling me about where the future of this program and school are going.''

Dassaw sees FAU's 3-4 defense as a great scheme for his abilities to rush the passer from the stand-up outside linebacker or defensive end positions.

Dassaw, who chose FAU over an offer Coastal Carolina, told Fauowlsnest that he is "100 percent locked in with FAU," but Owls fans can expect multiple more offers to come his way before the December 16th early signing period.

Stay locked into FAUOwlsnest for all FAU football recruiting news and updates.

Shane, thank you thank you thank you. Something other than  regular conversation. Can not wait to get back to normalcy.  Those with older family members , please be careful. This to shell pass. Just in time for FOOTBALL.

Shane, thank you thank you thank you. Something other than  regular conversation. Can not wait to get back to normalcy.  Those with older family members , please be careful. This to shell pass. Just in time for FOOTBALL.
Posted On: Mar 21st 2020, 5:35 PM #394517

Normally this would be a very hot recruiting time with players coming to see spring practice, but we know that is not happening.

Though this could end being a good thing for FAU recruiting wise.

At the first of two games today, the Owls' 1st commit for 2021 Dwight Dassaw getting ready:

Right place at the right time!

Right place, right time for @gvo_dunk! #FAU 2021 commit Dwight Dassaw (#18) seals the edge, allowing him to claim a fumble recovery for @PantherPride305. The future Owl is having himself a day! 👌 pic.twitter.com/8jcfqoFpWq

.@gvo_dunk Dwight Dassaw has a message for Owl nation. 🦉🦉Class of 2021 is going to be special. #fau pic.twitter.com/Q0cDnsS7sJ

Thanks for covering Shane.  Keeps us updated and shows love to future signees.  Win win

I have seen Dassaw play about 3-4 times now as a junior and senior.

He plays on a defense that has 5 five stars and two other 4 stars on in the 2021 class.

While those guys are unreal themselves, Dassaw always seems to be around the ball. There is not a pile he is not at the bottom of.