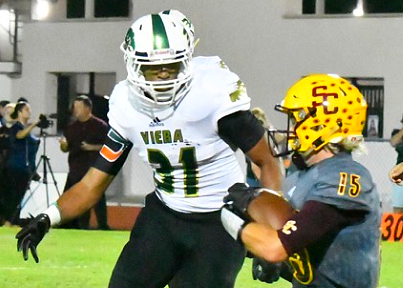 FAU has added a major defensive piece to its 2021 class in three-star defensive end Julius Barfield, who announced his commitment via social Wednesday night.

''I have been dreaming about these words for a long time, I am committing to Florida Atlantic University,'' Barfield said in a Twitter post.

Barfield, who is 79th rated weakside defensive end in the country according to 247sports' rankings, chose FAU over offers from Miami, Kansas, Marshall, Charlotte, UAB, Coastal Carolina, and UTSA.

The Owls offered the 6-4 220 lbs defensive end back on March 20th, and later closed the deal after FAU recruiting coordinator and linebackers coach Raymond Woodie held a virtual meeting with Barfield and his mother.

"We discussed everything from the defensive scheme to academics,'' Barfield said. "My mom had a ton of questions going into the meeting and had none coming out of it.''

Barfield (photo left above) will fit into FAU's defense playing the stand up the defensive end role - the position he has been so dominant at in high school while putting up 70 tackles, 17 tackles for loss, six sacks, and five pass breakups during his junior campaign at Viera high school.

Now at Eau Gallie high school, the lengthy edge-rusher looks to continue making life difficult for any offenses he faces his senior season.

"Every time I step on that field I want a shut out", he said.

Barfield also brings the production in the classroom, posting a 4.0 GPA from his junior year.

The Owls coaching staff will have their work cut out moving forward, as fans can expect a player with Barfield's measurables to be heavily recruited despite the commitment.

This one will be hard to hold. I do like the fact that his mom and dad were involved in his decision.

with the other 2 offers, no wonder he chose FAU


There is a lot more to players then the offer sheet somtimes.

Owl fans, I am up at Bayside vs Eau Gallie tonight to watch 2021 FAU commit Julius Barfield.

He looks like a potential  star. And he will only get bigger and better.