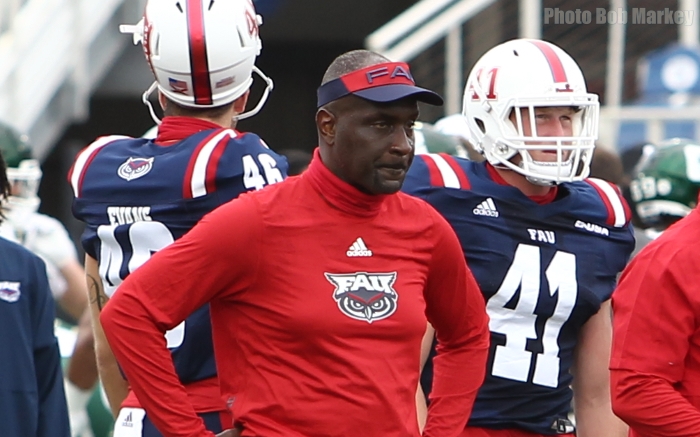 Being the Owls' recruiting coordinator, Coach Woodie played a pivotal role in all of the Owls' top three ranked Conference USA class, but he is individually credited as the primary or the secondary recruiter on eight of the Owls' commits.

He also played a role in landing tight ends, Jacob Pasley and Williams Ford, helping the Owls fill one of their biggest position needs.

Coach Woodie also landed plenty of players to play under his tutelage on the defensive side at his primary position group of outside linebackers and edge pass rushers. Signees Courtney McBride, Dwight Dassaw, Julias Barfield, and Justice Cross were all highly coveted recruits with all-conference upside.

Both Barfield and Cross have already enrolled at FAU, which will give them a big advantage in making an impact their first season.

This isn't the first cycle at FAU where Woodie has found success as he also was the primary recruiter on outside linebacker Chris Jones, who had three sacks as a freshman, and Ja'Marquis Johnson, who also saw playing time.

These young players will have to step up and replace outside linebacker Leighton McCarthy, who finished 5th in the country in both total sacks and sacks per game under Woodie his senior year.

Coach Woodie's decades of experience coaching and recruiting in the state, combined with the and ability to connect with kids, is what makes him one of the best recruiters in the country at any level.

"We discussed everything from the defensive scheme to academics." My mom had a ton of questions going into the meeting and had none coming out of it," Barfield told FauOwlsnest.com back in June when discussing a virtual meeting he and his mom had with Coach Woodie.

Though it does not count in the rankings, Woodie also played a role in bringing in former top 100 nationally ranked linebacker Keyshawn Greene in through the transfer portal.