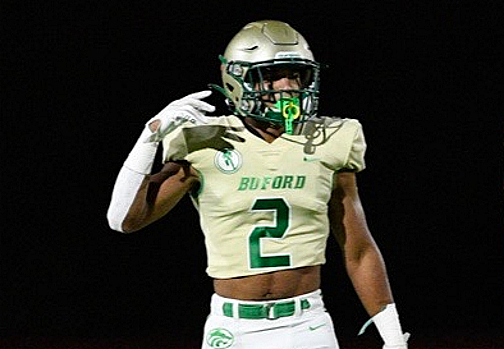 One of those notable NFL alumni is former Tampa Bay Buccaneer defensive back and 2003 Super Bowl Champion Tim Wansley.

Tim is considered by many as a pivotal player in helping Buford lay the foundation to start their recent two-decade run.

He was later honored by Buford high school by having his number two jersey retired in back 2002.

The number has remained retired until this past weekend, where 2021 FAU Football defensive back commit Amari Wansley wore the number for the first time in 18 years.

Buford head football coach Bryant Appling, who has been with the program for over 16 years, wanted a way to honor those of the past.

After multiple discussions with other alumni and those in the community, coach Appling decided Amari was the perfect representation of what number means and who wore it before him.

"Amari epitomizes everything that we want our Buford football players to be; the leadership he displays every day, the amount of effort he puts out in the weight room, classroom, or out on the field,'' said Appling.

There is also another special meaning for Amari in donning the number two jersey.

As some readers might have assumed, due to the same last name, Tim Wansley is Amari's uncle.

''Just me getting the opportunity to wear this number is just so special and just shows what type of family Buford football is,'' explained Amari when asked what this meant to him.

When asked if the jersey will continue to be worn after Amari graduates, coach Appling said he wants to get a patch for the jersey and use it to continue to have exceptional players wear it to honor those who have worn it before.

Amari Wansley is a three-star prospect and is rated as a top 100 player in the state of Georgia by 247 Sports.'

He chose FAU over offers from UCF, Indiana, Arizona State, and Iowa.

Stay locked into FAUOwlsnest for all your coverage of FAU Football and recruiting coverage.