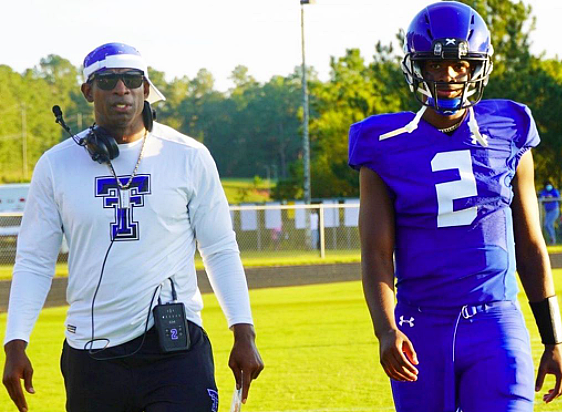 Trinity Christian traveled from Texas to Florida's panhandle to take on Gadson county in a game that featured eight 2021 FBS football commits and many more that hold offers.

Shedeur Sanders, Cam'Ron Silmon (Trinity Christian), and Jeremiah Brown (Gadson County) were the 2021 FAU commits amongst all that talent.

FAUOwlsnest was on hand to catch all the action and get recruiting updates from all the commits.

In what was a back and forth game with Gadson County's defense putting constant pressure on Sanders.

Brown did a lot of blitzing from his middle linebacker position and was able to land a big fourth-down sack of Sanders before the half.

Silmon helped lead a defense that held Gadson's passing game to virtually nothing and their top 2022 backs to under 100 yards rushing.

Sanders led his team to four touchdown drives, including a touchdown run on a naked that a fourth and goal to go from the one-yard line to seal the game 29-17.

After the game, FAU's commits provided updates on their commitments:

Shedeur Sanders - Owl fans have been worried about hanging onto Shedeur after his father took the head coaching job at Jackson State. Shedeur eased those concerns with paying their own way for an unofficial visit along with teammate Cam'Ron Silmon, to watch the Owls victory vs. the 49ers.

"I loved it! I had been there before, and I love the vibe; FAU is the place be,'' Shedeur said when asked about his trip.
When asked where he stands with his commitment to FAU, " I am 100 percent committed'', he said.

Cam'Ron Silmon - '' I feel like I made the right decision. I walked through campus and went to the game and just felt a great vibe,'' he said when asked about his trip to FAU and where his recruitment stands.

Jeremiah Brown -  '' I am locked in on FAU. I love coach Leavitt; we talk almost every day, and I love what he is doing with the defense.'' Despite Brown saying he is locked in with the Owls, it will remain a tough battle to keep him in the boat as many Power Five schools have shown recent interest.

Stay locked in with FAUOwlsnest.com as we travel the state checking in and evaluating FAU commits and targets.

I wanted to emphasize a point in this story:

Jeremiah Brown is my early "class crush'' per say.

He is big with tons of room for growth.


He can play all 3 LB positions at the next level.


If there was a true spring evaluation period I do not know if we could have landed him.