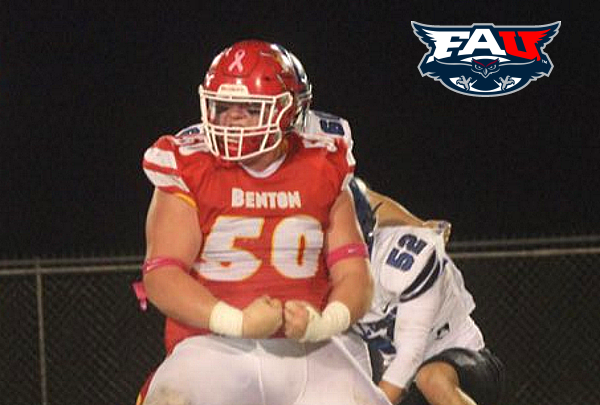 The Owls get their 2022 classing rolling with a big man in the middle of the line with Benton, Mississippi native Wil Saxton.

FAU offered Saxton back in December after getting word Saxton had dominated at the Southern Elite Camp, where he won offensive line MVP.

"I got in contact with FAU a day after the camp, and they offered,'' Saxton told FAUOwlsnest.com. "FAU was the first one to pull the trigger on me. I don't care if Ole Miss, Miss State, or even Alabama offered; FAU would be my top."

After a chat with FAU staffer David Kelly, he went on to announce the offer on December 14, 2020 via social media.

Saxton went from 6-1 260 to 6-4, 325 lbs in around 18 months. With most of that time being during the pandemic, it is easy to see why he has flown under the radar despite starting at Benton Academy since the 8th grade.

Though Saxton lives in Mississippi, he is very similar with the state of Florida. Female NFL referee Sarah Thomas is a close family friend, which has allowed him to attend the last two Super Bowls, including the early 2020 game in Hard Rock Stadium.

"I just love Florida; the beaches, the weather, and I can't wait to get to paradise.''

Saxton chose FAU over an offer from Bowling Green and interest from Ole Miss, Houston, Mississippi State, and Utah State.

As always, stay locked in for all your FAU Football and recruiting coverage.

HE DOENST EVEN CARE IF OLE P ISS OFFERS

I read on an ole  miss  site that the rebels are going to "kick the tires" of this young stud. Sounds like the truck isn't for sale any more . His films from southern elite  look so impressive. I suspect he will have a lot of opportunities . Would be a big get for FAU

Here is a video of the camp Wil was working at the day before FAU offered.

Keep in mind the one on one with no pads is heavily favored for the defenders to win.

It's early in the cycle, but people within the program are pumped about this commitment.

There has been only a handful of commits I have heard this type of excitement.

That's a big boy. I'm pumped about having him. If we can recruit the trenches…oh boy

Wil Saxton announced on social media last night that he has recommitted from the Owls 2022 recruiting class.

Saxton has recently picked up a lot of P5 interest.

Expect one of the Mississippi in state schools to be a contender for Saxton.

Wil Saxton announced on social media last night that he has recommitted from the Owls 2022 recruiting class.

Saxton has recently picked up a lot of P5 interest.