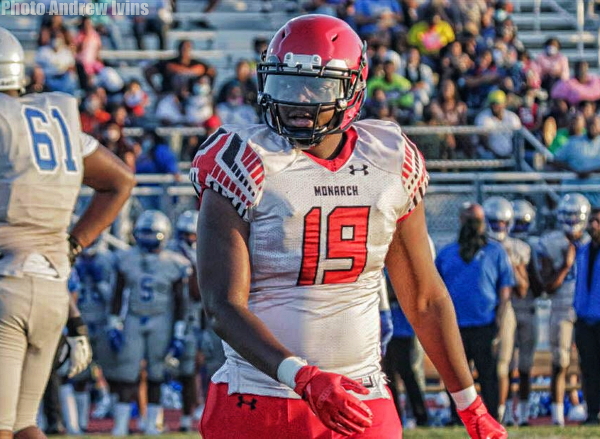 With fall camp starting next week, the FAU Football news cycle is starting to kick into gear again. And with that, a plethora of recruits will be on hand at the Schmidt Center as unofficial visitors in what is deemed an NCAA quiet period during which prospects can talk to college coaches in-person on their respective campuses. Here are some who are expected to be in Boca Raton this Friday and Saturday.

Shanard Lo-Ray 6-2, 250 lbs OLB - A Monarch High School edge rusher, Lo-Ray (pictured) recently reopened his recruitment on June 8th and is ranked as a three-star prospect by 247. He recorded 19 tackles and three sacks and was named to the All-Broward County 8A-6A second team by Sun-Sentinel. He has offers from 10 schools, headlined by Mississippi State, Akron, and Coastal Carolina.

Riley Ingram 6-5, 305 lbs OL- The junior tackle from Chaminade-Madonna High School can bench 295 lbs and can squat 455 pounds. He took part in Crafting Linemen's 'Under the Lights' showcase on July 18 and was named a top-five offensive lineman at the camp.

Bryan Lodge 6-3, 195 lbs QB - The dual-threat quarterback has the ability to also play wide receiver and defensive back at the high school level. He threw for 716 yards with 63 completions on 91 attempts (69% completion percentage) with four touchdown passes and two interceptions with Monarch High School last season. He will be transferring to Avant-Garde Academy for his senior season. So far, the University of Kentucky and Bethune Cookman University have shown interest in Lodge.

Colin King 6-5, 304 lbs OL - Hailing out of Spruce Creek High School in Port orange , FL, King visited FAU in June as well, and received a tour from offensive line coach Ed Warriner. The big man was tabbed in the top-two at the Down and Dirty Lineman Camp. He can bench 295 lbs, squat 385 lbs, and deadlift 475 lbs. In the classroom he boats a 4.55 GPA.

Torian Roberts 5-10, 162 lbs WR - The Class of 2023 receiver received his first Division I offer from FAU on Dec 31, 2020 via Owls' coach David Kelly. The rising junior from Winter Park High School is a three-sport athlete who also plays basketball and runs track. He can also play cornerback on the defensive end of the football field as well.

Kaylan Calvez 6-3, 185 lbs QB - The dual-threat Jones High School quarterback recently released a Top 5 which include FAU, Liberty, Kansas, MTSU, and Arkansas. He will participate in a workout while on campus.

Matthew James 6-1, 165 lbs WR - Rated three stars by 247, James has received offers from eight schools: including LSU, Kentucky, Duke, and FAU. Also playing safety, James was an All-Palm Beach County 5A-1A first-team selection in 2020. He put up 424 yards and eight touchdowns on 22 catches on offense and 32 tackles and an interception on defense.

Darius Thomas 6-2 190 lbs CB/S - The three-star defensive back out of Miramar has self reported offers from Texas A&M, Toledo, FIU, and FAU.

Marcus Murray  5-8 200 lbs MLB - The class of 2022 linebacker that goes by the nickname of "Beastmode" can bench 295 lbs and squat 465 lbs. He also plays fullback for Miramar High School.

Chris Brazzell 6-4 175 lbs WR - Originally offered back in September, 2020 by the Owls' Coach Raymond Woodie, the current Florida Atlantic commit confirmed that he will be back on campus for the third time since initially participating in a June camp session. His stock has been rising since and he recently picked up his third offer from Southern. Brazzell said he's become a fan of the scenery and the restaurants Boca Raton has to offer and also plans to play some hoops while in town along side his mom, dad, and brother. The rangy WR was reported to be visiting Tulane last weekend, however that did not materialize.

#FAU will have some SPECIAL folks on campus this weekend, one of which is current commit @Chris_Brazzell7, who was 🔥 at Camp earlier this month. More to come! #GoOwls! 🦉 pic.twitter.com/jsz6ggq50O

Jayden Gillens 5-11 175 DB - Rounding out the 2023 Jones trio, Gillens has earned an offer from Lane Kiffin's staff at Ole Miss.

Great write up! Thanks Colby.

While the football season is just weeks away, IT'S ALWAYS CROOTIN SZN!
When I'm not in school, I'm schooling the CUSA Twitter game; Follow Me Here

Thank you @4Warinner for having me on campus today. Loved being back in paradise again. Its such an awesome place. pic.twitter.com/G4qn781tO2— Colin King (@Colink56) July 30, 2021