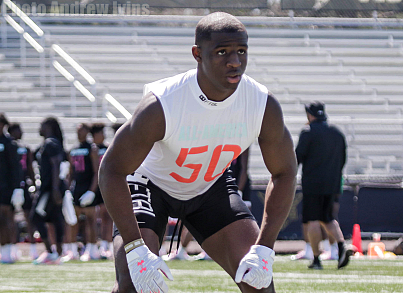 For the third straight week, at noon on a Friday, FAU has received good recruiting news.

This time the Owls added a major defensive piece to its 2021 class, as Gadson County highschool linebacker Jeremiah Brown announced his decision to bring his talents to Boca Raton.

"I would like to thanks to Coach Fuller and entire Gadson County Coaching staff, Coach Rispress for his efforts in my recruitment, coach Lies for training me physically, coach Tyson for developing me as a player, and most importantly my mother for her support and love,'' Brown told FAUOwlsnest.com.

Head coach Willie Taggart and his staff initially recruited the Tallahassee native while they were at Florida State and the relationship grew from there.

"My conversations with coach Taggart were heartwarming, and he just made me feel really welcome and at home,'' Brown shared.

"Coach Leavitt was part of those great 49ers teams and has coached so many great players.  "It doesn't matter if I play inside or outside linebacker, I feel like with coaches like (Raymond) Woodie and Leavitt I can definitely get to the next level," Brown explained.

The 6-2' 221 lbs prospect had a ton of production as a junior at Tallahassee Lincoln high school, leading the entire state of Florida with a whopping 147 tackles. He also added 14 tackles for a loss, four sacks, and two interceptions.

Football is not the only sport Brown has dominated in either. At the 220lbs division in the 2A classification, he finished the 2019-2020 season as the second-ranked wrestler in the state.

Current FAU players Kelvin Dean (Rickards high school) and Alvin Dempsy (Port St. Joe high school), who also both hail from the Florida Panhandle, played a part in getting Brown to make the Owls his choice.

"They are my homeboys,'' exclaimed Brown.

Brown has decommited from FAU class of 2021 and flipped to FCS Jackson State.


There is more to this than meets the eye with some of the deommits.


All I can say it's a long offseason and there will much more movement.

I bet taggart is so happy he got involved with Deon.

Has nothing to do with it…
E-Mail: rickthendersonjr@gmail.com

I wonder what it means that theres more than meets the eye. What I see is a ton of decommitments. I hope it has nothing to do With what I was talking about a few days ago.

I wonder if our class is still the best in the conference now.

A LOT of suspicious eyes are looking at Jackson St. recruiting right now - WAY too successful for that level - no matter who the Coach is!!!

Let's see if they play, then we can go from there.
E-Mail: rickthendersonjr@gmail.com