I don't know if public enthusiasm is beyond repair. We definite… 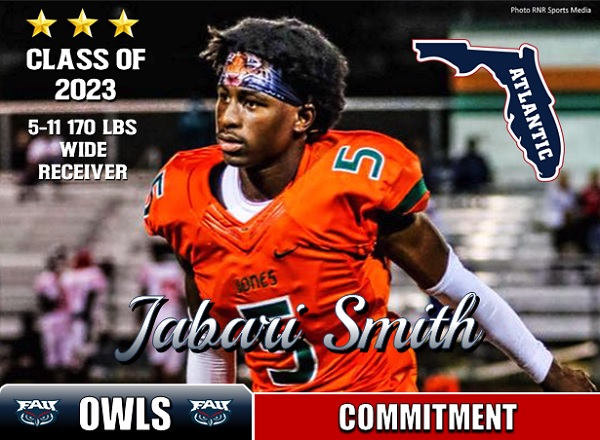 The FAU Football recruiting train continues to roll down the tracks in what has become the most productive Spring and Summer in program history from a commitment perspective.

Smith enjoyed a spectacular junior campaign for the Tigers, gaining 1,044 yards through the air over a 14 game span while posting a hefty 16.3 yard per catch mark that saw him find the end zone five times. The performance earned him First Team All State awards while also being the most yardage posted by a 6A receiver.

His Spring 2022 highlight tape is below.

Touchpoints by many Owl staffers were employed during his recruitment, with primary contacts being Coach David Kelly and later current position Coach Billy Gonzalez. He received his offer to join the FAU program on October 6, 2021.

Guest user
What happened to Preston Thompson? Is he no longer committed?

Added, thanks for the head's up.
E-Mail: rickthendersonjr@gmail.com

This is shaping up to be a deep class, especially on offense. Do both of these WRs project to be college WRs? Or are either more of a Smoke Mungin/Justin McKithen who will sign as WRs and almost immediately convert to CB?
Twitter: @JakeElman97

WR for both...
E-Mail: rickthendersonjr@gmail.com