Offensive Lineman Anthony Earle Breaks Down His Commitment to FAU 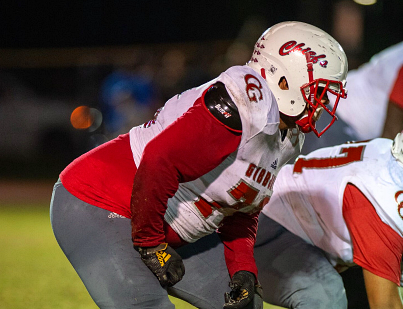 "I used to follow Oregon and USF, and I saw him build programs and leave them in better situations. I have a lot of faith in coach Taggart and want to be a part of what he is building,'' Earle exclaimed.

"There were a bunch of schools recruiting me hard, but I feel like my relationship with FAU's coaching staff was second to none, and I really enjoyed the process with them the most.''

Earle is a 6-3 310 lbs combo guard and tackle who feels he can be a versatile tool on the line.

"I feel like I'm athletic enough to play anywhere on the line. I can play tackle going up against the leaner speed rushers or kick it inside and doing it with more power,'' Earle said.

In 2019, Earle anchored the right tackle spot -opposite of 2020 Florida signee Gerald Mincey- for his 5A state championship Cardinal Gibbons team.

Anthony Earle will not be the only member of the Earle family to be joining the Owls football team in 2021.

Michael Earle, who is Anthony's twin brother, has accepted an offer as a preferred walk-on. Michael is a 6-1 290 lbs offensive guard who plays alongside his brother on the right side of the line.

FAU will now have two sets of twins in the o-line room in 2021, joining Jordan and Jadan Sandlin, who committed this past Sunday.

As of June 9th, 2019, FAU only had one public verbal commitment.

FAU fans I will be heading over to Cardinal Gibbons tonight to watch offensive linemen commit Anthony Earle and his twin brother Michael Earle who is committed as a walk on.

Last week, Anthony went up against Shamar Stewart, the number one rated DE in the 2022 class in the entire country, and held him without a sack.

You can watch the highlights here:

Lot's of weather delays tonight but we are finally underway. Here's a shot from earlier during one of the "warm-ups":

Thanks Shane.  Finally football. And featuring a big ugly. My kind of player

Our boys in more SOLID action!

Both brothers are 110 percent locked into FAU and said they hope they can check out a game soon.

Michael, who is coming as a preferred walk-on, has multiple FCS scholarship offers but believes in FAU and loves the coaching staff.

He is sacrificing a chance to play for free because of his commitment to FAU.

Thats awesome! And a chance to play his sibling. Hope it all works out, looking forward to seeing them as owls