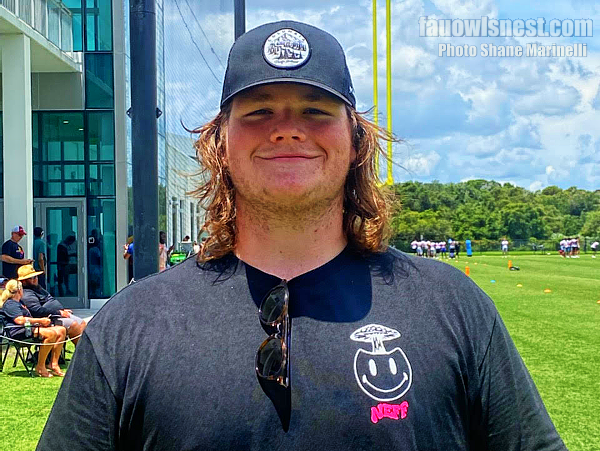 The Owl's had loads of talent on campus during their three camp sessions this Saturday, and one of the most notable was Loganville, Georgia native Griffin Scroggs.

At 6-5", 309 lbs, Scroggs' recruitment has caught fire lately with multiple Power 5 offers, including an offer from Georgia's head coach Kirby Smart this past Tuesday.

Despite the big-time offers, FAU is a player in his recruitment because of his family ties with the state of Florida.

"They are definitely one of my top picks because they are close to home, and I really like Florida. I grew in up in Florida, my mom is from here, it's a good spot for us,'' Scroggs told FAUOwlsnest.com.

Scroggs (pictured above) also told FAUOwlsnest.com that he expects to start narrowing down his recruitment by the end of the summer and will begin setting up official visits.

Despite the stiff competition, expect the Owls' coaching to go all-in on trying to land his commitment.