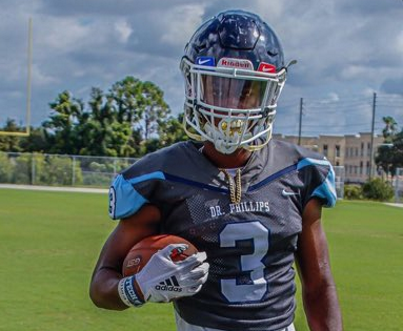 "I was talking to coach Guidry and coach ''Boosie'' (FAU cornerback coach Stanford Samuels Jr.) almost every day and they just made it feel like family.''

"The way coach 'Boosie' approaches and sees the game is a lot like my current coach - Coach (Rodney) Wells (Dr.Phillips head football coach).''

Like all coaching staffs across the country, FAU had to get creative in showing off its beautiful campus and new facilities with recruits unable to visit.

"I got a virtual tour of the stadium, the new weight room, all the player's meeting rooms, and pretty much the whole campus", Smith explained.

The Dr. Phillips product, who had nine pass breakups in 2019, loves defending receivers, although it is not the favorite part of his game.

Anyone who watches just a couple minutes of Smith's highlights will notice he plays with an old school level of physicality, one that produced 59 tackles, five tackles for a loss, and a sack from the safety and corner positions in 2019.

"If you play against me you are going to have to play physical", said Smith, "I love playing the run and hitting people.''

Stay locked in to fauowlsnest.com for all your FAU football recruiting news.

Don't know much about this player. But I really like any db that is physical and isn't afraid to hit. A lot of high school db's are for tacklers. The real goog ones earn a reputaion that not only can they cover, but they will hit you across the middle. Reputations are important for db's.

This is the type of commit that does not grab a ton of attention now, but in 4 years we talking about this player being drafted.

My sources rave about this player.

Finding a good length in the secondary is difficult.

It will be interesting to see how they use him as he can be an in the box safety as his game is a lot like Jalen Young's or he can be a long outside corner like James Pierre.

This long db and now the Barfield commit  is making Taggart  and FAU  looking strong on the recruiting platform. Willie doing what Willie can do. Impressive.

Thanks for all you  do Shane. This is huge for our program.

I love doing it. Not only for the program and The Nest, but I just love watching football.

10 or so FBS players on this field tonight.

The Juice is not seeing any plays his way, as Palmetto is not willing to take any risks.

JaDai Smith (@realtrilljadai) has been physical all night getting through blocks and helping in run support. He has not been thrown at once. #fau pic.twitter.com/HV6jBqXvs4

He's coming, and he's going to be very productive for the Owls!