Receiver Chris Brazzell Breaks Down Commitment to FAU Class of 2022 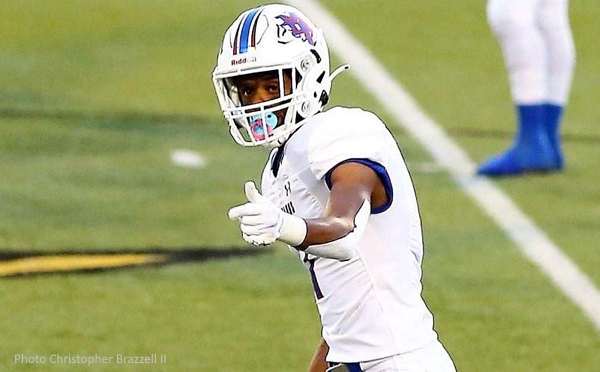 FAU prospect camps are already starting to pay to dividends.

"A guy [Hines Ward] on his level you take anything he says and run with it. He taught me a lot of things out here, like working on my dig, Brazzell told FAUOwlsnest after the June 4th camp.

Brazzell is familiar with working with former NFL players, as his father, Chris Brazzell Sr. spent time with the Jets and Cowboys.

Before transferring to Midland Lee, Brazzell posted 40 catches, 516 yards, and six touchdowns at Midland Christian in nine games in 2020.

FAU's football camp was not the only time Brazzell had seen FAU's campus. A month prior, Brazell's family was on vacation in South Florida, and he toured the campus himself.

"TCU has always been a dream school of mine, but when I saw FAU's with the palm trees, grass fields, the huge press box, I thought it was better", Brazzell exclaimed.

Brazell did tell FAUOwlsnest since committing he has heard from multiple other programs, including Kansas State and Colorado State.

This is the second current verbal commitment to the Owls 2022 class, joining linebacker Jaylen Wester.

The three-star prospect fills a significant need as the Owls football team will lose four receivers 6-1 and above to graduation after the 2021 season.

Stay locked into FAUOwlsnest for updates and videos from FAU Football camps though out the month of June.

Brazzell with another offer, this one from Austin Peay's HC:

FAU with the fire counter edit:

Reached out to Brazzell to clarify his stance and received no response.

However, have it from multiple sources with knowledge on both sides of the coin that this was a mutual outcome.

On one side, you have the need to bring in field ready talent, and on the other side some other activity "closer to home" in that of Tulane (hard pursuit). Pitt also entered the picture a few days back. Would he start there? No chance. But it is a confidence booster.

Bottom line, both parties appear to have had interest that is now dissolved.

Welcome to the drama of recruiting.
E-Mail: rickthendersonjr@gmail.com