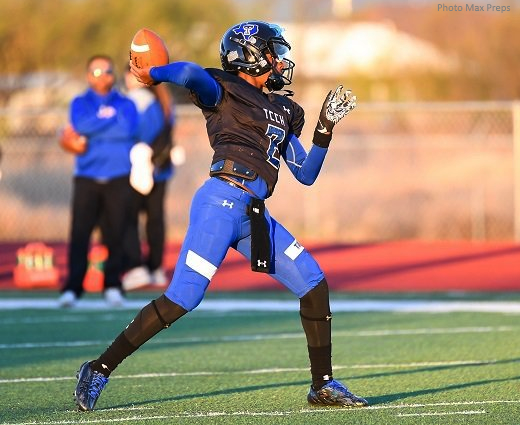 In what would typically be a Friday night where thousands of high school football teams across the country were kicking off their season, only a smattering were given the green light to start their season last night among Covid-19 concerns.

Sanders (pictured above) opened the game driving his team right down the field through the air and on the ground.

The drive was capped off with a 12-yard touchdown run by Sanders.

The rest of the first half was a defensive battle with both teams quarterbacks struggling for time to throw.

Silman lined up all over the defensive backfield showing off his physicality, making tackles, breaking up passes, and pressuring the quarterback on blitzes.

Trinity added a late second-quarter pick-six to take a 14-7 half time lead.

On the first drive of the second half, Sanders finished it with his first touchdown pass of the season from eight yards out.

Madison-Ridgeline fought their back to take a 21-20 lead midway in the 4th quarter.

Sanders made his best play of the night when he hit his receiver for 46 yards down to the three-yard line while facing pressure in his face forcing him to throw off his back foot.

Trinity Christian would take a 26-20 the lead two plays later with just over four min to play.

With Madison-Ridgeline driving, Silmon made what looked to be the game-sealing interception in the back of the endzone, ripping it away from the receiver with just over two minutes to play.

Trinty would make a costly error on the ensuing drive, fumbling the ball on a reverse that gave their opponent time to score the game-winning touchdown, taking a 27-26 lead with just seconds remaining.

Despite the loss, Silmon and Sanders showed major playing making ability in the game's biggest moments.

Trinity Christain will head back on the road next to the state of Tennessee to take on Knoxville Catholic.

I want him to finish the season mentally and physically healthy. He is the future of FAU football. This corona  thing so be a thing of the past in a year.

Sanders is the future of FAU football. Im especially looking forward to his Sophmore and Junior years when all the other highly touted recruits are making a real impact. If somehow he could be a Heisman candidate or even win the Heisman, that would be amazing. Of course well be all over major media outlets like ESPN every great game he has at FAU.

Shedeur and Cam'ron will be playing on ESPN at Noon today! Now that's exposure! Making waves!

This was a long time coming as I was told he was 50/50 before the early period.

As signing day gets closer, Willie Taggart and his staff will have to make some tough decisions with the current commits as space is very limited.

that kid has an offer from Georgetown.
I would take that!

Seems like a good kid. Hope it works out for him. Maybe him and Shedeur can play together again

Just for the record Silmon ended up at Jackson State...SHOCKER!
E-Mail: rickthendersonjr@gmail.com


Behind all those p5 transfers! Dumb move IMHO. Deion will be outta there after 2 seasons MAX, by FBS job (WITH his son) OR NCAA recruiting violations! Lots of stink/smore around his recruiting this year!!!