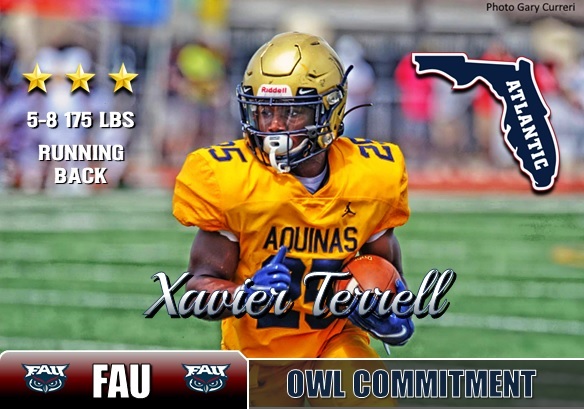 FAU Football's class of 2023 continues to grow, and the latest addition came in a Friday Night delight as speedy St. Thomas Aquinas running back Xavier Terrell decided to stay home and join the Owls.

In the end, like many others, he wants to be a part of the emerging brand that Coach Willie Taggart and his staff are putting together.

"The three times I was on campus the coaching staff as well as the players were welcoming and took the time to answer questions my family and I had, not to mention their academic excellence", said Terrell of his decision to select the Owls. "At the end of the day I prayed about it and it felt right!"

Terrell posted 1,283 total yards last season for Aquinas, netting 597 on the ground and 656 through the air, while adding in a 30 yard kick-off return. He was responsible for 10 touchdowns in the process.

Below are video highlights from Terrell's junior year:

Prior to St Thomas, Terrell had a successful stint at IMG Academy where he tallied 1,670 yards as a freshman while hitting the endzone 21 times over a nine game span.

Terrell received a wide range of interest from other programs such as Pittsburg, recruited by former Owl head Coach Charlie Partridge, Florida State, Georgia Tech, USF, Marshall, and many others.

He was offered by the Owls earlier in the Spring on March 7th, and was recruited by FAU running backs Coach Donte' Pimpleton.

"From my first conversation with Coach Pimp he has always been consistent with me", said Terrell. "Actually, during that conversation I spoke with more than half of the coaching staff which was a first for me."

Terrell is the sixth member if the Owls' 2023 class, joining those listed below:

Good to see the solid number of Broward prospects continuing to legitimately consider FAU. Im sure the impending AAC move and the Schmidt only help!
Twitter: @JakeElman97

This is the highest level of recruiting this early in the season we have ever had. Every take has been a legitimate get.

I am very very impressed.

The move to the AAC in 2023 has certainly been a bonus for recruiting.
Hopefully we can hold on to these Broward recruits and more as the momentum to sway them away will heat up in the fall.

Terrell was on hand for today's' Fall Camp practice… 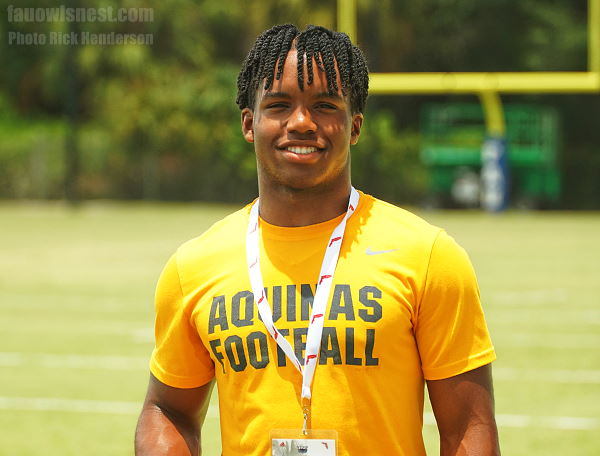