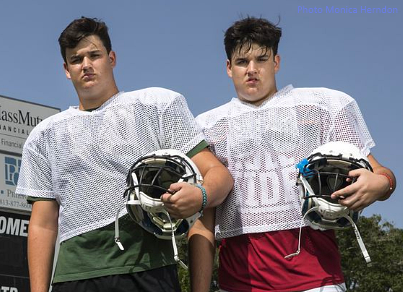 Willie Taggart and his staff added a couple of huge pieces to their 2021 class when offensive linemen and twin brothers Jaden and Jordan Sandlin announced their commitment via social media Sunday afternoon.

''We have always liked the thought of staying state, we have family close to West Plam Beach,'' Jaden said.

FAU defensive line coach Kevin Patrick, who recruits the Tampa area, initially reached out to the pair and offered them a little over a month ago.

Coach Patrick and the Owls' offensive line coach Jeff Norrid both recruited the twins from there on out.

''Coach Norrid did the virtual tour, and we liked it a lot, and it stuck with us,'' said Jordan.

"Coach Taggart had called us that same night, really like how he runs things and his gameplans and stuff; we are thinking FAU is going to stay up there", continued Jordan.

Jordan, who is 6-6, 290 lbs and Jaden, who is 6-6, 265 lbs, have collectively been dubbed the "Twin Towers," currently play all over the offensive line at their high school.

"Towards the beginning of games, we will stack aside together, so if the ball is going left, he'll go to left guard, and I'll go to left tackle until they catch on to it, then we will just play everywhere on the line,'' Jordan explained.

Despite their flexibility to play all over the line, FAU sees them potentially as a starting left and right tackle combo in the future.