Ten Local Prospects to Know for the FAU Class of 2022 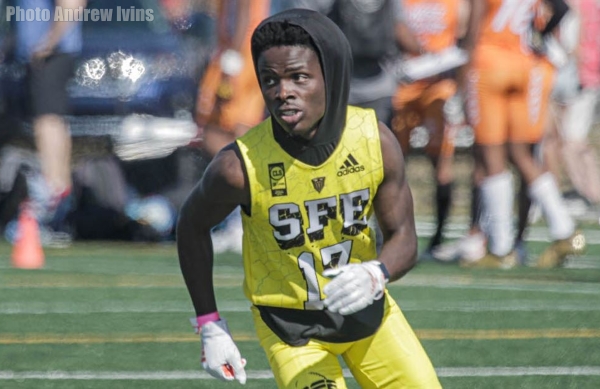 Willie Taggart and his staff are still in the midst of adding the finishing touches on the 2021 class, but recruiting for the class of 2022 is also in full swing.

Like the 2021 class, coaching staffs will face similar challenges of possibly not seeing any prospects in person until the NCAA ends a now year-long in-person recruiting dead period.

Schools will also still be able to take any seniors back at the end of the season who have not used their Covid waivers, which could limit class sizes as many programs will be right up against the 85 man scholarship limit.

These limitations provide a possible advantage for FAU to land some big-time local prospects, which otherwise, in a typical year, would be pulled away to a Power 5 program.

With all this at play, here are ten local prospects Owls fans should keep their eye on this cycle:

D'Mon Brinson CB, 5-11, 180 lbs, Dillard high - Defensive back arguably is one of South Florida's deepest positions this cycle, and Brison is one the best up-and-coming prospects. His ability to press and lateral quickness could make him a plug-and-play nickel at the next level. Brinson is gaining recognition while playing for one of the countries' elite 7 on 7 teams- Defcon. He already holds offers from FAU, Marshall and getting plenty of Power Five interest.

Jaylin Terzado WR, 6-0, 155 lbs, Champagnat - Under the radar receiver, who averaged just over 24 yards per catch in 2020 and touts 4.42 speed. FAU is currently his only offer, but they will change quickly in the coming months.

Websly Ettienne DB, 5-11, 170 lbs, Western - Ettienne can play corner but will most likely play safety at the next level due to his ability to come down hit and make big hits. He has picked up offers to FAU, Marshall, Kentucky, and Indiana.

Jackson Crozier OL, 6-4 275 lbs, Cardinal Gibbons - Five of the last six high school linemen the Owls have signed have been from private schools, so it would not be a shocker to see FAU go for another Gibbons linemen, where they signed Anthony Earle and took Michael Earle as a walk-on in 2021. Crozier is the younger brother of Ryan Crozier, who played with the Giants and Broncos.  He has all the length and athleticism to play outside but can play center as well.

Daverrick Jenkins WR, 6-4 185 lbs Miami Northwestern - Jenkins spent his 2020 season at Hallandale high school, where he mostly played quarterback. He has shown a smooth stride and good speed with the Miami Immortals 7 on 7 team and will get a chance to showcase still further when he plays for the always loaded Miami Northwestern in 2021.

Elijah Mc-Cantos DB, 6-1, 170 lbs Miami Edison - Mc-Cantos has a host of Power 5 offers due to his impressive frame giving him the ability to play anywhere in the secondary. This one could be a long shot for FAU, but Owls' running backs coach Chris Perkins is one of the area's strongest recruiters and could give FAU a chance.

Mike Jackson Jr. WR, 5-10, 145 lbs, Miami Palmetto - Another South Florida speedster with a lot of interest and offers from schools all over the country. It has yet to be seen if he will have the ideal size for the Power 5's. Jackson (pictured above) could be a class headliner if the Owls can pull him in.

Tellek Lockett OL, 6-3, 285 lbs, Miami Northwestern - Lockett is the son the Telly Lockett, who was on staff with Willie Taggart at FSU, but has recently joined Charles Huff at Marshall. It would seem like a long shot landing Tellek over his dad, but who knows where the schools and staff will be by the time the first sighing period rolls around.

Marquis Lymon DB, 5-9, 180 lbs Delray Atlantic - Lymon could be FAU's the best shot at, landing a four-star this cycle. The local product had five interceptions and averaged over 10 yards per carry in a shortened season. 2021 signees Jahbari Hill and Jerimiah McClendon both shared played in the secondary with Lymon at Atlantic high school, and it could be appealing to join his teammates at FAU.


Stay locked in with FAUOwlsnest.com for all your year-round recruiting coverage.

Thanks Shane.  Never too early to think about next season's recruiting. .