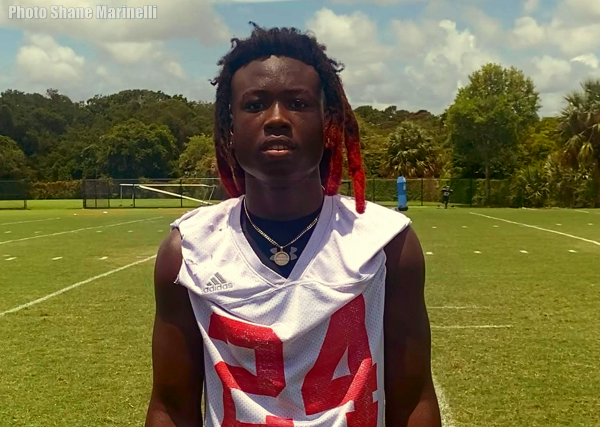 FAU hosted their first day of prospect camps for the month  featuring 200 prospects over two sessions from all over the country.  This is the first time FAU coaches have evaluated any players with their own eyes in just over 15 months. There were some notable athletes, and few that are just starting to make a name for themselves, on hand.

Here are those that stood out amongst the rest of day one:

Chris Brazzell WR, 6-3 170 lbs, Midland Lee high school - Coming all the way from Midline, Texas, the long pass-catcher showed good speed and a huge catch radius, making plays all over the field. NFL great and Owls offensive analyst Hines Ward spent a lot of time working with Brazzell giving him tips and pointers after almost every route he ran. He currently only holds an offer from FAU but is hearing interest from Florida State and Stephen F. Austin.

Javan Robinson DB, 5-10 160 lbs, West Orange high school - The first session was loaded with athletes from the central part of the state and Javan (photo above) stood out. The three-star corner showed great speed and agility in all his drills and did not allow a catch in one-on-ones or seven-on-seven drills. He has communicated with Boston College, South Florida, Wake Forest, and picked an FAU offer shortly after the camp.

Donovan Giles WR, 6-4 180 lbs, Viera high school - Giles recruitment has gained a momentum recently and impressed many at the FIU camp on June 1st. Today was no exception at FAU. Giles size made him an easy target for quarterbacks to connect with during passing drills. Former FAU receivers coach DJ McCarthy, who is now at FIU, is recruiting Giles heavily. Expect FAU to be involved with the talented wideout recruitment moving forward.

Christain Murphy LB, 6-0 205 lbs, Dillard high school - Murphy had an impressive spring and was invited to work out for FAU's coaching staff privately on June 3rd with some teammates and returned to FAU for the June 4th afternoon camp session. Murphy has excellent explosiveness and an impressive frame that will allow him to add even more mass. Utah State is Murphy's only offer, but that will change in the coming months.

Naivyan Cargill TE, 6-6, 216 lbs, Palm Beach Gardens high school - Cargill's frame will have him standing out on any field. The two-sport athlete was uncoverable by any linebacker that tried. Cargill is a true diamond in the rough type player who has yet to see many offers come in but will gain traction with a big senior season.

FAU Football will host their next two session camp on Saturday June 12th with a "Big Man" session in the morning and skill positions in the afternoon.

Great news and many thanks Shane 🦉🏈👌