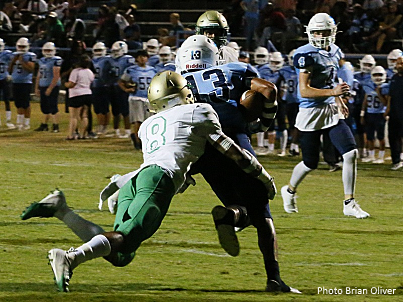 In what is becoming a near-daily phenomenon, Willie Taggart and his staff have landed another pledge of a recruit against stiff Power 5 competition.

This time, Georgia powerhouse Burford high school athlete Amari Wansley has chosen to play football in paradise after coming down to a final three of Nebraska, UCF and FAU.

"Right when they offered me from the jump, I had a bunch of the coaches text me, and they just were pouring knowledge into me about what FAU has to offer,'' Wansley told FAUowlsnest.

"There was not a day that went by where a coach from FAU didn't hit me up, encouraging me to get after it."

"From the very first call, he (coach Gundiry) shot me straight and told me all about himself and his entire family. We have a lot in common, both being part of mixed families,'' Wansley explained.

"He is a funny guy, and we had a lot of great conversations.''

''With the big-time commit (Sheaduar Sanders) they got this week, they are definitely building special class, and I want to be part of it.''

Wansley played on both sides of the ball in high school, helping lead his team to a state title in one of Georgia's largest classifications, but at 6 feet 175 pounds and a physical style of play, he projects to be an in the box safety at the next level.

"I love to get down and tackle,'' Wansley exclaimed.

According to 247sports industry generated composite rankings, Wansley is ranked the 100th best safety in the country and the 103rd best overall player in Georgia.

Wansley, who will be majoring in finance, is impressed with Florida Atlantic's academics.

"I know FAU has a great business school, and being in a city like Boca will definitely provide me with opportunities in that field,'' said Wansley.


FAU now has 23 members of their 2021 class, and Wansley becomes the third member from the Peach state joining defensive linemen Jacob Merrifield and Courtney McBride.

As always, stay locked into FAUOwlsnest.com for all your FAU Football recruitment coverage.