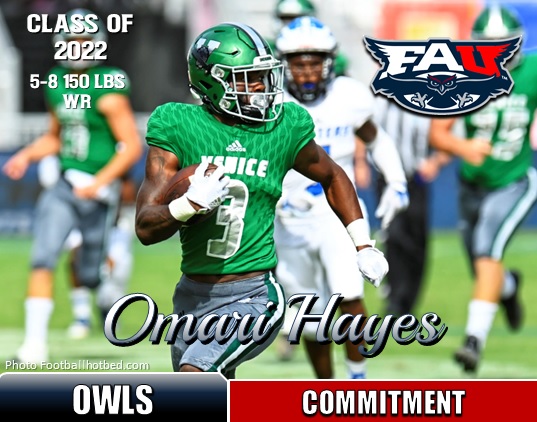 Coach Taggart and staff have turned another one - and in record time - as Venice High speedster Omari Hayes has gone from being a MTSU Blue Raider to an FAU Owl in less than 24 hours.

Originally pledging to Lafayette, Hayes would later re-open his recruitment and gain prompt interest from the fellow C-USA Murfreesboro counterpart. That was short lived as an immediate counter was too good to pass on. During his overall recruitment, he also received offers from both the Army and Navy service academies as well.

Hayes is a versatile player who helped lead Venice to a Class 8A state championship in 2021 while catching eight passes for 78 yards with a touchdown, and adding 26 yards on the ground in the eventual win over Apopka.

He finished his senior season with 14 catches for 851 yards and 11 touchdowns to go along with 37 carries for 192 yards and eight rushing touchdowns. As a kick returner, he averaged 26.0 yards per kick return and 6.2 yards per punt.

In his junior year at Riverview High School, Hayes accumulated 640 receiving yards with five touchdowns and was named team MVP.

A duel sport athlete Hayes also ran track, and has recorded a forty yard dash time of 4.4 seconds. He will reunite with fellow team mate and wide receiver Jayshon Platt, who is also joining the Owls this season.