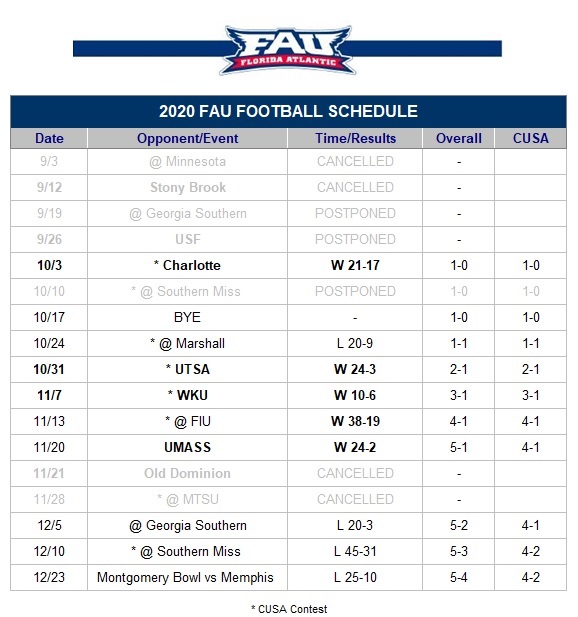 We need to be careful with georgia southern. They have quietly become a good team.

Yeah, they were a FCS power house. 6 championships. I can see them developing into a good team.
I lived near Statesboro when I lived in GA. The school has a good loyal following.
FAU - THE REAL SLEEPING GIANT


Yeah and its the god awful triple option. Pat Chun the gift that just keeps on giving…………..

Thought I might go to the Minn game but its not going to happen on a Thursday, most likely GA Southern now.

I like the bye before Marshall, outside of Minn probably our toughest game.
GO OWLS!

Georgia Southern beat Appalachian State in their crib and lost to Minnesota by 3 points. Definitely not a push over.

I see some parallels from last years schedule to this years schedule. Given that it will be tough to evaluate FAU early in the season.  Obviously, the Minnesota game will be difficult as PJ Fleck has that program reaching new heights. We wont learn much about the team in the cupcake against Stony Brook. Ill be keeping a close eye on weeks 3-6, a tough road game against Georgia Southern, then USF followed by Charlotte.

It is also notable that FAU will stay close to home to end the season, with only one trip outside of the state of Florida post Halloween. This friendly travel slate could come in handy if FAU has another late season run.

Schedule is out, so it's time to start getting excited!

Coach Taggart pumped up the crowd at The Burrow during the halftime of the FAU vs. MTSU Basketball game on January 16th.

I love it when Taggart talks about taking us to the next level. He does it all the time. This is the same guy who led USF to its first ever year end top 25 ranking

Its not just about winning games its also about building fan support and getting students at the tailgates into the stadium. When you can sell out FAU stadium on a regular basis and getting 20k+ fans to games in a so-so year thats taking it to the next level to me.