Not sure why I am reading more about Taggart Jr than MJJ. I was really hoping to see more action from MJJ this year.

Taggart Jr. is a running threat as well, I just want the 2 best out there. The ones who can move the ball, score points and NOT turn it over!


They both had reasonably serious injuries. it's very likely that MJJ is not 100% yet (as Taggart Jr is).


They both had reasonably serious injuries. it's very likely that MJJ is not 100% yet (as Taggart Jr is).

They both had reasonably serious injuries. it's very likely that MJJ is not 100% yet (as is Taggart Jr).

I hope so too!
As far as I remember MJJ had the best performance during last year's spring game and that includes throwing the ball. Wasn't he a 4 star recruit?
What I saw in Taggart Jr. was concerning.
We will see. 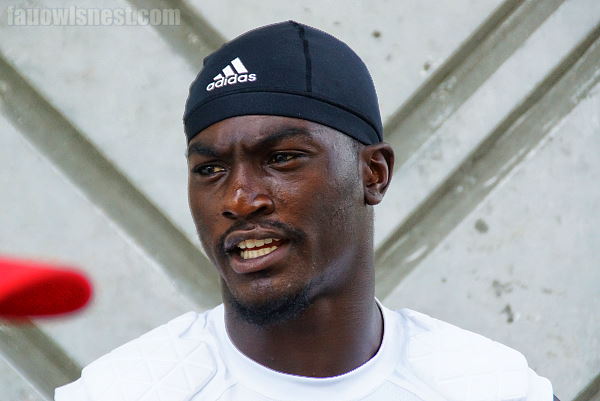 "I believe Coach Orlando has a great defense. He's aggressive, and likes to blitz. We have some guys that match up with the things that he wants to do for us, so I believe we will do them really good." - FAU LB Jamie Pettway
E-Mail: rickthendersonjr@gmail.com


Something new this season is that when the Owls' defense steps off the sideline to take the field, the players get down in a stance and wait for direction from defensive coordinator Todd Orlando. This is all done in an effort to reinforce an attack mentality or to take the field with urgency.

The Owls will hold a late session today with that scheduled to start at 2:00 PM.

Spoke to Coach Taggart today, and it is official - Perry to start for the Owls:

#FAU Skipper @CoachTaggart with today's full update on the Owl's quarterback room, including the play of @ko_live5 and the back-up battle. #GoOwls 🦉 pic.twitter.com/nYUDn8iATT