Thanks for the updates, Rick. Looking forward to hearing your takes on the team

The first two players to impress the coaching staff enough to move up from group one to group two were freshman cornerback Michael Boone and redshirt sophomore Dorian Hinton. Boone used Friday's opportunity to continue to impress not only the coaches, but his new teammates.

Wow looks like Boone may be a day 1 starter on the outside. What a boon for the defense! 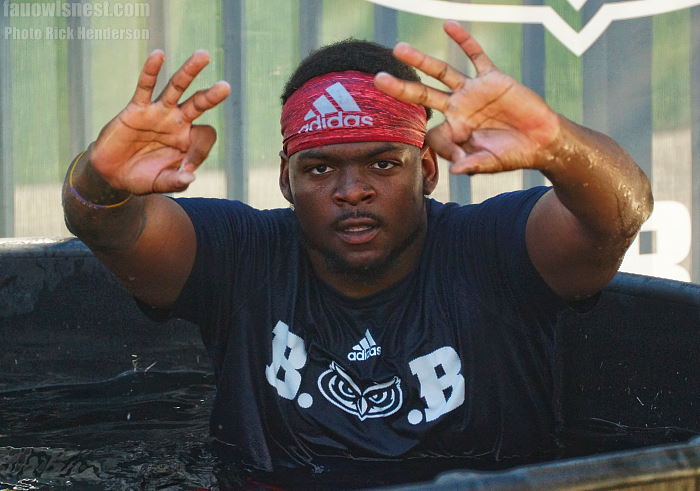 Highlights from Saturday's combined sessions via SID Katrina McCormack, which was Day 4 of camp:

The Owls used Saturday's time to work through their practice paces and then joined members of men's and women's soccer and volleyball on FAU Stadium's Delray Hyundai Deck, where they signed autographs and spent time with Owl fans.

Coach Taggart On teaching the players

"The thing I look for is what our guys take from the meeting and how they apply it on the field. You look to see who's taking notesWhat's gratifying is when you get on the field and you start hearing guys talkThat's what we're trying to get our guys toward, where they're not just going out and running the play because we called it but understanding what play we called and why we called it and then being able to communicate with each other to get it done. They're learning to do that and applying it now and that's going to make a huge difference for us."

"It starts in the meeting room. We actually started talking about the red zone last night. We had the coaches come up and give the offensive red zone philosophy and the defensive red zone philosophy. We did it as a team, that way you can learn both sides of the ball. We made sure that we worked red zone all day today in practice. That's the most important thing. When you get in the red zone, you have to score points. One thing we learned last night is whoever has the most attempts in the red zone are going to score the most points. Numbers don't lie, so we have to get down there and we have to capitalize."

"I've known I had to lose weight since high school. I finally got a program that was correct. I was trying to do it on my own. I thought eating salad was straight. I didn't know if you pour all the Ranch on it, it evens it out."

The Owls will be off on Sunday and will return Monday for one more day in helmets and uppers before putting on full gear Tuesday morning.

Notable highlight plays from today's session via SID Katrina McCormack, which was Day 5 of camp:


The Owls will next don full gear Tuesday morning in what will be the first full contact and tackling for the team in camp thus far.

Notable highlight plays from today's session via SID Katrina McCormack, which was Day 6 of camp:

Notable highlight plays from today's session via SID Katrina McCormack, which was Day 5 of camp:


The Owls will next don full gear Tuesday morning in what will be the first full contact and tackling for the team in camp thus far.


I didn't realize Ford was back. Good news for the offense

Yup he was gonna be, but Davidson was not. And sorry to see so many who opted to use transfer portal out still not signed anywhere. Portal is a dangerous thing too players!