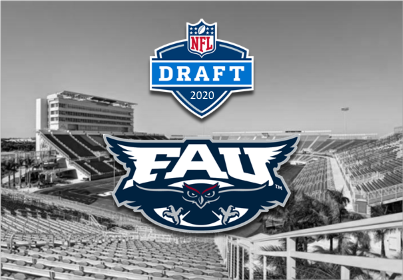 It has been quite the offseason for FAU Football. The coronavirus shutdown has forced the cancellation of Spring practice, the FAU Spring Game, and FAU Pro Day. The lack of a Pro Day is particularly unfortunate for the many talented Owls that have dreamed of hearing their name called at the NFL Draft. No Pro Day, plus the NFL not allowing franchises to work privately with potential prospects, hurts the players on the fringe of getting drafted the most, especially those at mid-major programs, who may not play hardened defenses on primetime television. Despite all of this, the show must go on.

A couple of Owls have gained national recognition heading into this year's NFL Draft. None more than John Mackey Award recipient and the first unanimous All-American in FAU history, tight end Harrison Bryant. The Georgia native, as well as corner back James Pierre, participated in the NFL Combine in Indianapolis.

FAU saw a pair of Owls selected in the 2019 Draft. Dynamic running back duo of Devin "Motor" Singletary and Kerrith Whyte, Jr. heard their names in the third and seventh rounds, respectively. Motor was the fourth Owl all-time to be selected in the third round, the highest round for any FAU player has been picked. The 2019 Draft was also the first time more than one FAU Owl was selected since 2014 when defensive standouts Keith Reaser and Randell Johnson went in the fourth and seventh rounds, respectively.

Going into the 2020 NFL Draft, FAU has had nine players selected since their initial appearance in 2010 with quarterback Rusty Smith. FAU's highest pick was cornerback D'Joun Smith at 65th overall.

The first unanimous All-American in program history has had serious interest from a wide variety of NFL franchises looking to solidify their tight end position. New England, Indianapolis, Pittsburgh, are known to be interested in the athletic playmaker's abilities.

To Bryant's luck, his tight end style of crisp route-running and solid pass-catching talents, paired with his God-given athleticism and determination to continue blocks, are not an easy-to-find combination in the NFL. And as NFL offenses continue to develop over time, more and more franchises have increased their desire for an H-Back style of tight end; a style that Bryant perfected while at FAU.

Listed as a top five prospect at his position by The Athletic, CBS Sports, Sports Illustrated, Pro Football Focus, and more, Owl Nation can probably expect Bryant to be a second-day draft pick.

Fellow NFL Combine participant James Pierre is not receiving the same headlines as his former teammate, despite championing the FAU defense. Pierre had the task of shutting down opposing offenses' primary wide receiver on a weekly basis. The Honorable Mention 2019 All-Conference corner declared for the Draft following three interceptions, four pass breakups, and 44 tackles in his junior season. The Deerfield Beach native could slip into Draft in the sixth or seventh round pick as a "developmental cover-2 cornerback" according to NFL analyst Lance Zierlein.

While this trio may not hear their names announced in the NFL Draft, there is little to no doubt amongst the FAU faithful that their talents are of NFL quality.

Kyle Davis will be listed as an Owl despite forgoing action in Boca Raton in 2019, opting to try his luck in the CFL instead. The Auburn transfer's speed alone will be enough for NFL franchises to bite with a free agent contract. Of note, he's also received as much pre-draft inquiry via FAU's support staff as Bryant by potential suitors.

Rashad Smith was the playmaker for FAU's defensive in 2019. The All-Conference Honorable Mention linebacker led the Owls in tackles with 109, while leading the nation in fumble recoveries at 5. Constantly displaying his tenacity and football intelligence, the Homestead HS product always put himself in position to make a play.

Brandon Walton will go down as one of the best offensive lineman in FAU history, as the three-year starter deservedly made the 2019 All-Conference First Team at left tackle. The Largo, Florida native's 6-5, 300 lbs size should be enough to hear his phone ring with a free agent contract. His positive attitude and his ability to be coached, will make him a steal for any NFL franchise.

As we have seen, anything is possible based on a team's needs and their decision to take a chance on a prospect. However, these players most likely won't see interest without a try-out coming beforehand.

Defensive linemen Noah Jefferson and Tim Bonner are a pair of big names that have stats to back-up their reputation. Chris Tooley helped FAU's defensive back field be one of the most feared in C-USA. And USF transfer De'Angelo Antoine has the speed and agility to compete at the professional level.

Peter Schrager of NFL.com has Harrison Bryant going 23rd overall to the NE Patriots in his mock. That would be awesome, and while Harrison is awesome, I will not be holding my breath.

Funny but with the Gronk "trade" news I immediately thought of this possibility! Not in 1st round, I will believe that when I see it but sounds great to me - and to Harrisons accountant too!!!!


Guess there goes my dream of seeing Harry B here in Tampa.

But the fact remains: as pro football offenses continue to evolve towards the spread style that has taken the college ranks by storm, then H-Back TEs will be in greater demand. That works out perfectly for Harry B.

Another name I want to throw in the Tryout Pool: WR DeAndre McNeal. The kid has NFL size already. And we know he can ball when called upon. I think he'll make the best of any opportunity that comes his way.
When I'm not in school, I'm schooling the CUSA Twitter game; Follow Me Here

You have your days mixed up. The 23rd is today, Thursday. Yesterday was the 22nd Wednesday. The 24th is tomorrow, Friday.
FAU - THE REAL SLEEPING GIANT

3 picks in and no harry B... this is ridiculous.

First TE is off the board. Chicago selects Notre Dame's Cole Kmet in the second round as the 43rd overall pick.
When I'm not in school, I'm schooling the CUSA Twitter game; Follow Me Here

According to moneymakers, we have two potential obstacles left: