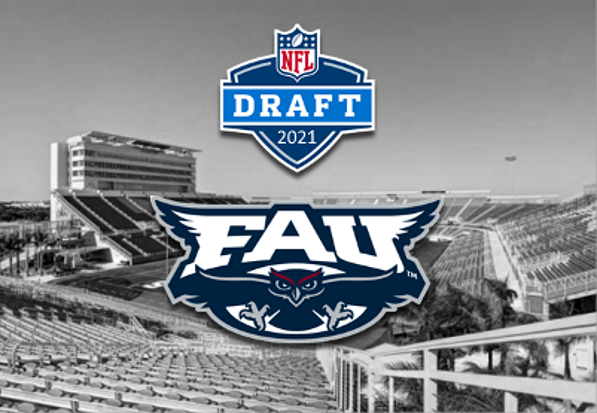 The 2021 NFL Draft will begin Thursday night, and will be broadcast on a combination of the following hetworks:


The schedule is as follows:

Im going to say Emmons goes in round 6

I think Mccarthy is the only shot.

No dice for either of the Owl hopefuls in the draft, but we'll keep an eye on UDFA.

Leighton McCarthy, who played four seasons for the Florida Atlantic University Owls, has agreed to a free agent contract with the Tampa Bay Buccaneers, the 2021 Super Bowl champions.

With the signing completed, McCarthy will become the 52nd Owl to sign a professional football contract since 2004, an average of nearly three a season.

The 6-3, 220-pound linebacker came to FAU in 2016 and redshirted his first season. He then became an integral part of the Owls' defense as a member of the Conference USA All-Freshman team in 2017. The Owls won their first C-USA Championship, and Boca Raton Bowl, in that same season. His first three seasons, McCarthy worked as a defensive end, which included guiding FAU to its second C-USA title and second Boca Raton Bowl win in 2019. His final season as an Owl, McCarthy shifted into more of a linebacker role to fit into the defensive system. He garnered Second Team All-C-USA honors for his efforts.

McCarthy played in 50 collegiate games and accumulated 161 total tackles. His final two seasons he recorded double-digit tackles for loss and concluded his career with 35 TFLs for a total loss of 154 yards, which is tied for second among FAU career leaders. He tallied 20 career sacks for a loss of 127 yards, which ranks second among FAU's all-time sack leaders behind current NFL standout Trey Hendrickson. He added one interception, three pass defenses and two forced fumbles to his career totals.

Emmons to the Seahawks

Emmons becomes the 53rd Owl to sign a professional football contract since 2004, an average of nearly three a season.

The 6-0, 220-pound running back joined the Owls in January of 2019 after a freshman season with Alabama and then Hutchinson Junior College. Emmons began his FAU collegiate career versus Oklahoma, unfortunately just a few plays in, the North Carolina native suffered a broken ankle. He would rejoin the Owls with four games remaining in the 2019 season and rushed the Owls to a Conference USA Championship and a Boca Raton Bowl victory. In his last four games, he found the end zone six times and averaged 4.1 yards per carry. Emmons carried the ball 51 times in 2019 for a total of 237 yards. He closed out his final season, playing four 2020 games, in a COVID-19 stop-start season. Emmons rushed for total of 116 yards and one score his senior campaign. His FAU career totals include nine games played, 88 carries, 353 yards and seven rushing touchdowns.

While he is the 53rd FAU player to work with a NFL team, he is just the second to join the Seattle Seahawks. Brandin Bryant, a defensive lineman and current member of the New York Jets, was the first back in 2016. Emmons joins teammate Leighton McCarthy as a 2021 undrafted free agent (Tampa Bay Buccaneers).

Via The Athletic: Leighton arrived at Bucs camp today and did not pass his physical. The team did not officially sign him. We will see if he catches on elsewhere. Tough break.
Twitter: @JakeElman97

Was this an injury issue or just not in physical shape?
Hard to imagine he would let this happen.

The Athletic* said it was a failed physical which could be anything. Weirdly, the Bucs apparently included him in a photo gallery showcasing the rookies arriving yesterday but never officially signed him later that day? Weird.

So now its up to BJ Emmons, which means hes going to become the next Alfred Morris.