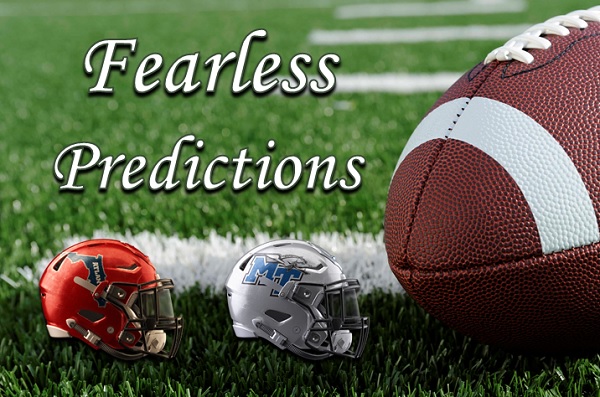 Well FAU played like who I thought they were against WKU, and even them being a much a better team at home this year I dont see much changing.

FAU has another lackluster performance on offense, and the FAU defense keeps them in the game for a while. FAU loses a close one

I think the game will be over by the half with a dominant performance by MTSU.

I want to believe were going to get the job done. Taggart needs to coach this game like it could be his last because it might just be. Im going to say 20-14 Owls on the back of a dominant defensive performance and a pair of scores from Johnny Ford. Next stop Bahamas Bowl against some MAC team


Actually happened twice against them…Relive the 2016 moment as well - OVERTURNED.

Our moment of Glory - overturned 😢😢😢 pic.twitter.com/o1E88ULrgK

A battle of 5-6 teams with bowl eligibility on the line for both. Must win for both teams. This has been a pretty heated rivalry in the past, so I don't see that changing this week. The big question leading into this one is if FAU will be motivated or if the team has already given up on the season. I hope the former, but fear the latter. A big win can do something to salvage the season and get a bowl bid. A big loss and it will be a long off-season with lots of doubt hanging over the future of Taggart and the program. Lose this week and the seat will be very hot starting with week one next season.

I doubt FAU comes in very motivated. I expect sloppy play from the Owls and a more determined showing from MTSU. Even so, I think FAU has the talent to pull off the win. Despite my better judgement I am going with FAU.


Actually happened twice against them…Relive the 2016 moment as well - OVERTURNED.

Hayball has a punt for sixty and a punt downed at their two.

Posey, Dean, McCammon, and Davidson lead a run-only offense in the fourth quarter…


…to bring us within seventeen.

No. We play (foot)balls-out. The win is decided by a flag toss and/or a wasted time-out.


Taking advantage in the double-point, lightening-round will be crucial to an Owl victory.