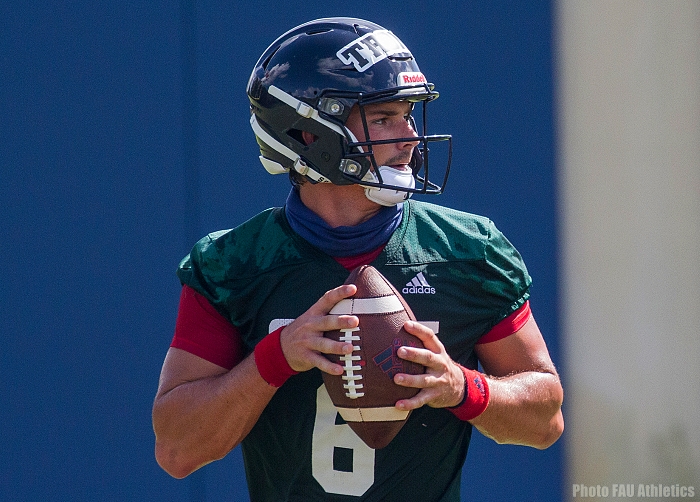 With the 2020 season still looming, FAU will now look to replace former starting QB Chris Robison. The redshirt junior was removed earlier in camp from the roster. Robison ranks 2nd all time in passing yards and touchdown passes in FAU history.

That will now open some potential doors for the remaining roster members.

Every practice is a competition, said QB Justin Agner.

In the quarterback competition are three familiar names to FAU fans and one newcomer: redshirt junior Nick Tronti, senior Justin Agner, redshirt freshmen Javion Posey and true freshmen Willie Taggart Jr. Much of the offense will likely be new as Drew Mehringer was brought on as Co-Offensive Coordinator. For the past 3 seasons, Mehringer was at the University of Texas serving as WRs and Passing Game Coordinator. Clint Trickett returns to the staff as Co-offensive Coordinator and quarterbacks coach.

For the first time during camp, QBs Nick Tronti, Justin Agner, Javion Posey and Willie Taggart jr. were made available to the media. Below are some of the highlights of what they had to offer.

Did K. STEWART Enroll?  Was there any other enrollment casualties?

Kobe Stewart, Jaden Wheeler, and Pewter Warrick Jr. are all Gray Shirting and will enroll in January 2021.

This was expected on signing day.

Lou Dorsey the JUCO TE looks to be the only 2020 class member not expected to enroll.

Kobe Stewart, Jaden Wheeler, and Pewter Warrick Jr. are all Gray Shirting and will enroll in January 2021.

This was expected on signing day.

Lou Dorsey the JUCO TE looks to be the only 2020 class member not expected to enroll.


OK did not hear about the Grayshirt.  So S'ship is pushed till this year which will impact this year's signing #.  He was highly ranked so good to hear he is enrolling.

NMHU hasnt listed him on online roster, so who knows? But I would expect the current TE room to be how it looks whenever they open. Maybe theres a move or two with the walk ons. And if they play spring football, I have no idea what happens with Jackson Wenstrom since hes on baseball scholarship and would likely pivot to that.
Twitter: @JakeElman97

(let's keep that here though)

Too bad, would have been a HUGE player for us.

As for Wenstrom, here's what Coach Mac had to say:

"He is a fantastic young man who has served his country and has done everything right. He asked me if I would allow him to try to play football. I said you have earned the right to live out your dreams."

He's listed at 6-3, 247 lbs, and super athletic…so a major bump in that department as well.