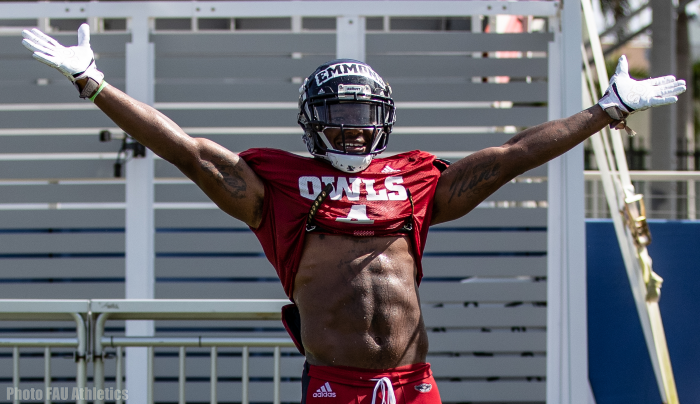 As the team prepares for their first full scrimmage this upcoming weekend, co-offensive coordinator and QBs Coach Clint Trickett met with the media this afternoon. Joining the rising coach for availability were fellow quarterbacks Nick Tronti, Justin Agner, and Willie Taggart Jr.

With 18 days to go until the season opener, Trickett made it clear the starting quarterback position remains open. There is no one clear cut guy just yet, so they just gotta keep battling everyday", he said. Furthermore, Trickett praised the quarterback room with how they are handling the competition. They are all great kids, I love working with them every day", Trickett said.

Not only is it a busy time for coaches to prepare for the season, but also for the future. The window to contact class of 2022 recruits began last night at midnight. Momentum can still be felt around the program as the team announced a very exciting change in scheduling to begin the Willie Taggart era at FAU.

Nice work Ryan! Happy for Agner getting the scholarship. My money is still on Posey or Tronti winning the QB job.


Glad to know Aaron Young is performing well. Youre right that FAU has had a nice trend of receivers in their final year (either grad transfers, seniors, or Durante) stepping up big time. Lets hope he continues the trend.