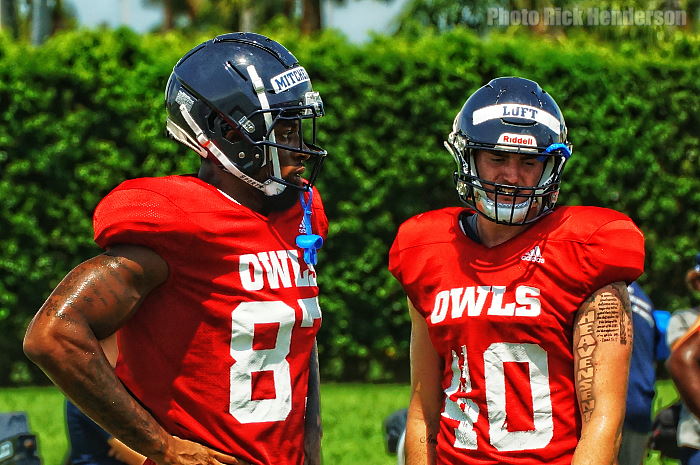 Day nine of camp is here already and with that the competition continues to heat up. One of the positions that have shown the most depth so far has surprisingly been the tight ends after the position group as a whole only recorded one touchdown in the 2020 season.

"Everyone has their own individual role, which is awesome because that's what you're looking for," tight ends coach Jon Bills said. "We want to play a lot of guys at both the tight end position and all across the team and they have what they're good at and what they're not good at and they're improving to become that all-around player."

The Owls have been running 22 personnel, featuring a lot of two-tight end sets, which is a far cry from what they had to work with last season. Newcomers Zaire Mitchell-Paden (photo left), 6'5, 247 lbs Austin Evans, and Lucas Luft (photo right) add depth to the position, while Redshirt Freshman Rahmod Smith adds even more to the position after returning from injury. Up and coming freshmen 6'4, 237 lbs Jacob Pasley and 6'4, 214 lbs William Ford fil out the room giving FAU a complete stable to draw from this season.

And with that, here is the sixth rendition of the parliament Position Previews, detailing the tight ends, and notes from today's media availability.