Kosi Perry's old IG got hacked and he made a new one….… 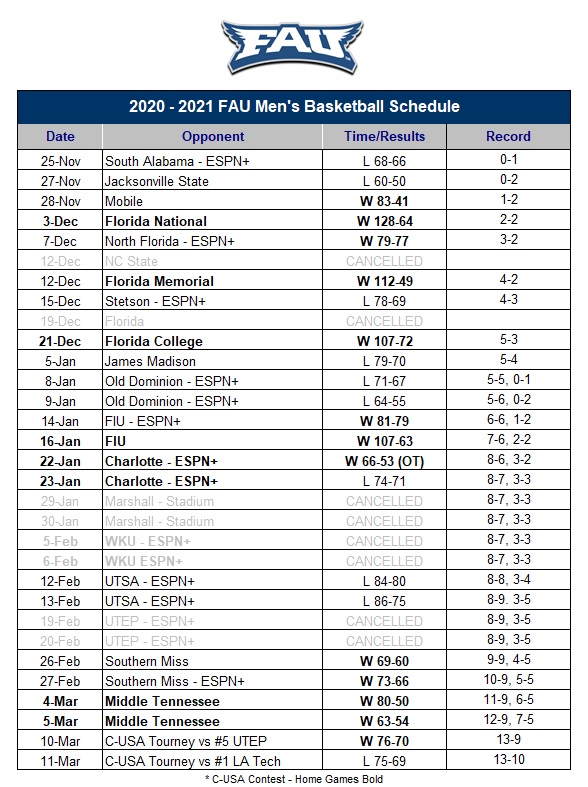 Added the C-USA "TV Schedule" up top to the master…of note the Owls receive zero appearances on CBS or CBS Facebook while other programs land there multiple times…all partnership is limited to ESPN+ or Stadium for FAU.

They do however, earn a showing on SEC Network at Florida for Non Conference.
E-Mail: rickthendersonjr@gmail.com

There's the first cancellation of the year: NC State will be unable to play the Owls on Saturday due to a COVID outbreak inside the Wolfpack program.

ALSO BREAKING: #FAU Basketball's contest vs. #NCState is cancelled due to a #COVID19 outbreak within the @PackMensBball program. @FAUMBB next game is now Tuesday, 12/15 at #Stetson.

FAU has quickly found a replacement for Saturday as the Lions from Florida Memorial will pay a visit to The Burrow. Tipoff against the HBCU NAIA program will come at noon.

JUST IN: @FAUMBB adds a home game against #FloridaMemorial for noon this Saturday. This replaces #FAU's cancelled contest vs. @PackMensBball after a #COVID19 outbreak within the #NCState program.

December 19's contest against UF looked to be in doubt following Gators' start Keyontae Johnson truly horrific injury a week before at FSU.

The emotional wake of the tragedy called for the cancellation of UF's game against UNF originally set of Wednesday.

By the grace of God, Johnson's status has taken positive steps. This suggests that Saturday's game may be played after-all, despite the outlook of the matchup originally looking unlikely earlier in this week.

We should know for sure if the game is on by tomorrow.

.@FAUMBB's game vs @GatorsMBK looks good-to-go despite previous discussions to postpone/cancel. The game was cast into doubt following the emotional wake of #UF's Keyontae Johnson's horrific injury vs #FSU. Final decision should come tomorrow. @Keyontae remains in our prayers 🙏 pic.twitter.com/CBr6zAiXj3

BREAKING: Saturday's game vs. UF has been called off.

JUST IN: @FAUMBB's game Saturday at @GatorsMBK has been canceled due to the emotional wake from #UF's Keyontae Johnson's injury. @CoachDustyMay: "We wish nothing but the best for @Keyontae and will continue to keep him and the UF basketball family in our thoughts and prayers." pic.twitter.com/ZSaAKRuSSN

Owls close out their non-conference schedule by returning to their winnings ways. A 107-72 victory over NAIA Florida College was exclaimed by Jailyn Ingram's 26-point performance.

Should be noted that the high-scoring Falcons have been held to less than 72 points just three times coming into the game, including putting a scare into USF in a 94-84 losing effort.

FAU will take the holidays off before returning to The Burrow on New Year's Day to face Middle Tennessee.

OWLS WIN! | #FAU 107 - #FC 72@FAUMBB gets back to their winning ways with another triple-digit effort against an instate NAIA outfit. @CoachDustyMays boys improve to 5-3 on the season thanks to a 26 point outing by @2easyJ_! 🔥🔥

This weekend's C-USA play opening series against MTSU has been postponed:

BREAKING: This weekends @FAUMBB series vs #MTSU has been postponed due to positive COVID-19 tests and contract tracing measures. The teams are working with #CUSA to reschedule. #FAU #GoOwls 🏀🦉🏀 pic.twitter.com/ljWsxDgUrh

The Owls are next scheduled to play at Old Dominion, Friday and Saturday, Jan. 8-9, and will then travel to Miami to face FIU on Thursday, Jan 14 before returning home to face the Panthers on Jan. 16 at 4 p.m.
E-Mail: rickthendersonjr@gmail.com

Looks like the Owls will head to Virginia early and squeeze in a game against James Madison on Tuesday.

JUST IN: #FAU 🏀 has scheduled a home-and-home with @JMUMBasketball. #JMU will host the first game this Tuesday, 1/5, at 4 pm. The return date to Boca Raton is TBA. #GoOwls 👌 pic.twitter.com/g9uA8thH6d

FAU's series at Marshall will not be played this weekend.

BREAKING: @FAUMBB series set for this weekend at #Marshall is POSTPONED due to "contact tracing related to a Tier I member of the #FAU travel party." #CUSA will determine a make-up date later in the season. We hope for the best from everybody in the program! 🙏 #GoOwls 👌 pic.twitter.com/g09suWWVve