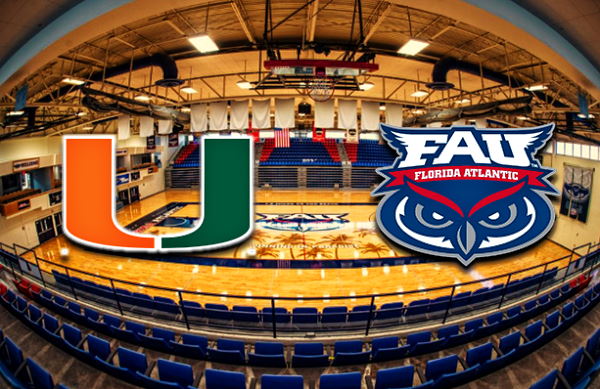 What: Florida Atlantic vs. Miami

Where: The Burrow - Abessinio Court at FAU Arena


Miami at a Glance

The Hurricanes (1-1) are coming off a 95-89 home loss to Central Florida on Saturday. The Knights scored nine straight to open the second half and never looked back, leading by as much at 17 points thanks to a commanding presence off the glass.

Veteran guard Kameron McGusty led Miami from the floor with 28 points while posting a robust 7-of-14 from the field and 14-of-17 at the line. Miamis 39 free-throw attempts in the contest were their most since Coach Jim Larrañaga has taken over.

Prior to that the Hurricanes set down Canisius 77-67 to open the 2021-22 season. McGusty was again the leader with 20 points to pace the quartet of Miami guards they started with.

After dropping their regular season opener to New Mexico 99-92 on the raod, Florida Atlantic moved to .500 with a 79-56 win over in state opponent Warner Saturday. FAU held a 46-34 edge in rebounding but realized a 17-3 margin on the offensive end. They turned up the defense to force 21 Royal turnovers which led to 26 points before the final horn.

The team will welcome Miami for what will be the 2nd of nine straight games in The Burrow - a very desirable change over years past - and one of three for the week, with UT Martin and North Dakota on tap for Friday and Saturday.

Eastern Carolina transfer Bitumba Baruti is off to a solid start as an Owl and is one of four FAU players in double-digits on the squad at 10.0 PPG, while also tied for the lead in rebounds at 6.5 RPG.

Expected offensive leader Bryan Greenlee was sidelined for the Owls' opener due to injury prior to the Lynn exhibition game but did return to register 15 minutes against Warner while posting four points to go with three dishes and two rebounds.

Turnovers are a problem early:

Owls pushing the ball well, but 4 TO's have the #Canes ahead early. Baruti with a long 2 pointer for FAU.

And continue to be:

Turnovers continue to be an issue, and mount to 10 for the Owls. Michael Forrest is pacing the team with 5 points so far.

Owls handing around, tryin to get below the double digit mark as we close in on the break. That said…

The BURROW is ROCKING! pic.twitter.com/umaDQ2vf0y

Change two performance categories, and this game is within 5 points MAX: 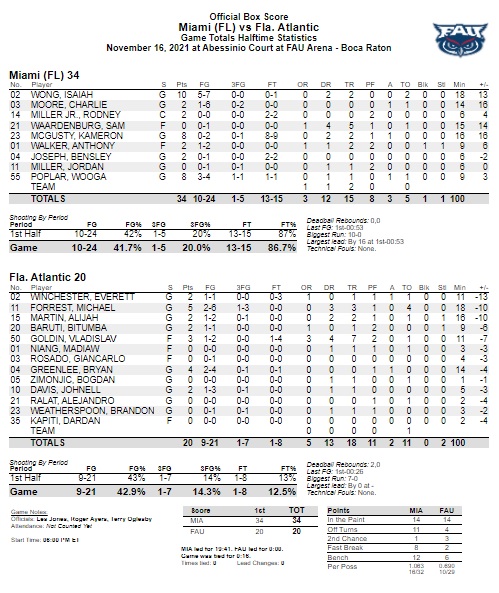