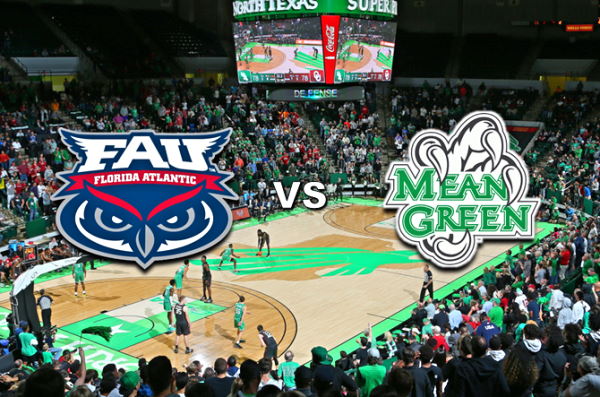 Where: UNT Coliseum - "The Super Pit"


North Texas at a Glance

Having wrapped up the Christmas holiday with a return to the practice floor late that evening, FAU will return to C-USA game action against a North Texas team that delivered a heart breaking 54-51 loss last season in Boca Raton. The Owls had five chances to take the lead or tie the game in the final 1:43, but couldn't convert.

Head Coach Dusty May sees this year's squad not only better equipped to deal with the Mean Green's approach, he believes they have what it takes to get a road victory in what has been historically a tough place for FAU to do so.

"It's a challenge because it's a lot different than the way we play - gritty, grimey, and physical - it's an absolute war" said May. "But we believe in our depth and our experience to go on the road and be in a position to win."

The Owls were also outrebounded 35-26 in the contest, but have made strides in that area overall and enjoy a +6 margin over UNT on the defensive side heading into the game. 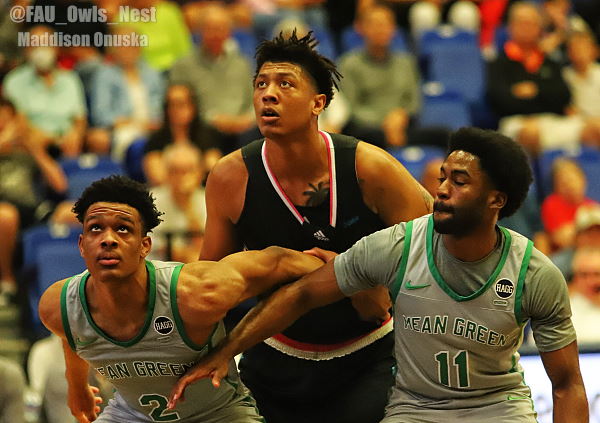 Forward Giancarlo Rosado (photo center above) led the Owls with 10 points in 20 minutes of action. This season he's just one of the many reasons that Florida Atlantic ranks fourth among DI programs in bench points per game (35.8). The Owls rotation includes just one player who has started all 11 games, and nine averaging 16+ minutes per game.

"No question, we're older, we're deeper, we're more mature", May said. "We're much more advanced than we have been in the last four years because of our continuity and everyone being on the same page."

His unit is in good shape physically as well.

"Right now we have a full roster, and there's not a lot of teams in the country that have 13 healthy bodies dressed and ready to go", said May.

The Owls received five votes in this week's Coaches Poll, and while it is not a focal point for the team to crack a coveted and program first spot in the rankings, wins in Denton and over soon to visit UAB could only further the case for the inclusion.

North Texas is riding a five game win streak, and will look to hold on to their 4-0 mark on the season at The Super Pit against the visiting Owls. The Mean Green's two season losses have come at the hands of St. Mary's (33-63) and UNC Wilmington (51-55), with the former receiving votes in both major polls.

Nothing has changed from a style of play perspective, with UNT looking to milk the clock, take shots late in the count, and force teams to play defense throughout the process each time down the floor.

UNT forward Abou Ousmane was named player of the week for December 26th after shooting a career nest 15-of-19 for 37 points in the Mean Green's win over UTSA last Thursday. Five of his 11 rebounds came on the offensive end and generated seven second-chance points.

Three point play is not a strength for North Texas (31%), but they do a solid job of defending it (32%). When they do shoot the triple guard Tylor Perry is the man to account for with a 44.6% success rate (3rd C-USA) off of a team leading 65 tries.

The Mean Green has held their last 10 opponents to 57 points or less. They are 8-2 at home all-time against the Owls, and have won the last two meetings overall.

The line for the contest opened in favor of North Texas by 2.5 points and immediately went to 1.5 points. Based on our numbers crunch, that is off by ~ 7.5 points. Picking the Owls in an "upset" by 4-5 points.
E-Mail: rickthendersonjr@gmail.com

No changes to the Starting Five for FAU MBB:

The Owls should have the early lead, but have a blown lay-up and a blown high low feed.

Johnell Davis draws the foul just before the second media stop and will have a chance to give the Owls their second lead of the night out of the timeout with two at the line.

Martin and Goldin with 3 points each.
E-Mail: rickthendersonjr@gmail.com

FAU is 0-8 from thee point so far in the contest.
E-Mail: rickthendersonjr@gmail.com

Every time we try to feed Vlad he can't receive the pass.

I've counted three of those so far.

Coach May had this one right, gritty, grimey and deliberate.

Owls have 9 of their points at the line.