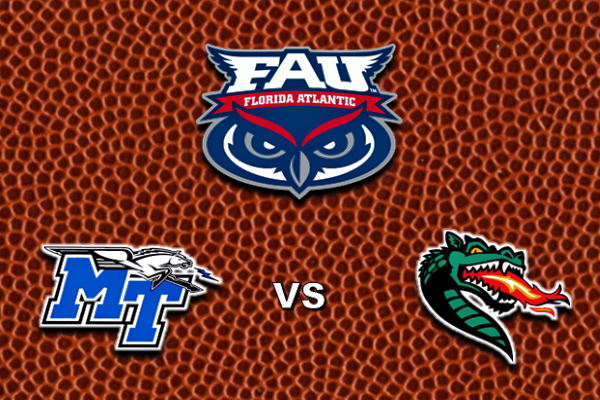 Series: The Blue Raiders own a 19-8 edge over the Owls, although FAU has won four straight.


MTSU at a Glance

Middle Tennessee is off to a slow start in conference play following back-to-back losses to Rice and defending C-USA champions North Texas. To their credit, both losses were by single digits, falling 65-61 to the Owls from Houston and 70-63 to the Mean Green.

These defeats come off the hands of a COVID-19 outbreak within the Blue Raider program, forcing a 12-day pause in Murfreesboro.

Guard Josh Johnson lead the team in scoring in MTSU's losing effort last week, scoring 13 and 19 points respectively. He paces the team in scoring throughout this season, averaging 12.7 PPG. His 33% from the arc also leads all Blue Raiders with substantial minutes.

Defensively as a team, MTSU ranks second in the conference in turnovers forced per game, third in average steals, and third in turnover margin. Most of that is curiosity of Eli Lawrence and Jefferson pickpocketing 22 and 20 steals, respectively.


UAB at a Glance

The Blazers from Birmingham look to be ready to challenge for the conference crown again despite a shocking 85-80 defeat to the hands of Rice. The loss comes even more surprising as it comes on the back of UAB upending defending C-USA champions North Texas 69-63 in Denton.

UAB will play host to FIU on Thursday. The bad news for the Panthers is that the Blazers are 3-0 this year when coming off a loss and 8-1 following a loss in the Coach Andy Kennedy era.

Coming into this week's games, UAB has four players averaging double digits in scoring. Guard Jordan Walker leads the team with 16.1 PPG, good for fourth in the conference. Behind the talented junior from the Empire State is guard KJ Buffen, guard Quan Jackson, and guard Michael Ertel at 10.8, 10.3, and 10.1, respectively.

Forward Trey Jemison leads the team in RPG with 7.5, placing him fifth in the league. Buffen is not far behind as his 6.7 RPG puts him just outside of the conference's top-ten.

FAU continues their upward climb with a massive upset of perennial C-USA Basketball power in Marshall. The Owls lit up the scoreboard in route to a 90-77 victory over the Herd in Huntington.

In the win, Michael Forrest led the way with a game-high 27 points, which included six 3-pointers. That performance put the guard from Blanche Ely High School atop the conference in 3-pointers per game.

The Owls' win over the Herd put the boys from Boca atop C-USA's East Division, currently shared with Old Dominion.

Forrest leads the team in scoring with 15.2 PPG. Guards Alijah Martin and BJ Greenlee chase at 13.1 and 10.3, respectively.

As a club, the Owls rank third in C-USA and 64th nationally in 3FG's per game. That said, the .346 conversion rate places FAU seventh in the conference and 146th in the nation.

Nonetheless, FAU's 12.5 offensive rebounds paces the league and sits within the nation's top 30. Moreover, the Owls' +5.7 rebounding margin puts FAU on top of the conference and 54th nationally.

GALLERY: FAU Arena Concepts from 2021 Men's and Women's Basketball
When I'm not in school, I'm schooling the CUSA Twitter game; Follow Me Here

Well well well… FAU will head into the contest as UNDERDOGS. Tip-off is ten minutes away. 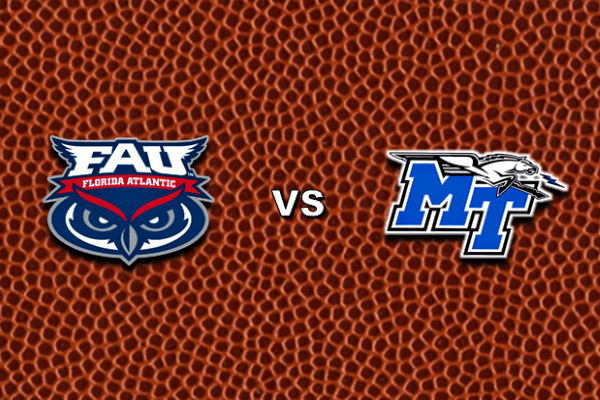 Really strong starting five tonight against a Middle Tennessee squad desperate for a victory at the Murphy Center.

Not to be repetitive (because i probably said this three time sin other threads) but I really like Carlos Rasado.

Guy is going to be a very good player for ussolid skills down low. Old school style.
E-Mail: rickthendersonjr@gmail.com

Strong start for the Owls, including this impressive shot from Goldin, goes to waste as the Raiders light it up from downtown.

FAST START from the Owls, who race out to an early 8-0 lead! And how about this GOLDEN shot from Vladi Goldin!? 🪙💫

Not to be repetitive (because i probably said this three time sin other threads) but I really like Carlos Rasado.


I would like anybody that can shoot a three right now.

Eight attempts and Alijah Martin has the lone conversion.
When I'm not in school, I'm schooling the CUSA Twitter game; Follow Me Here

Yea, we can't hit the broad side of a barn right now.
E-Mail: rickthendersonjr@gmail.com

Don't care who we play, 29% shooting WON'T CUT IT in this conference. It certainly won't bode well in the AAC either.

Meanwhile Middle is 49% FG after this loooooong 17-4 run.

Martin is STILL the only Owl with a three pointer.

Oooooof! Really rough end to the half for the Owls, who allow the Blue Raiders to end the period on a 17-4 run.@martin_alijah leads FAU scorers with 8 points, including this difficult layup! pic.twitter.com/FEBiYb494n

Looks like tonight is not our night. But if we are to make the comeback, it's either now or never…

Things are going... not well. But @__bloading__ drains this three to keep #FAU's pulse alive.

Still, the Owls are down to #MTSU 60-40 halfway through the second period. pic.twitter.com/kmLs2JaSWB

Now the announcer likes Rosado…that's about all to like tonight.