Owls Welcome Hilltoppers and Herd to The Burrow 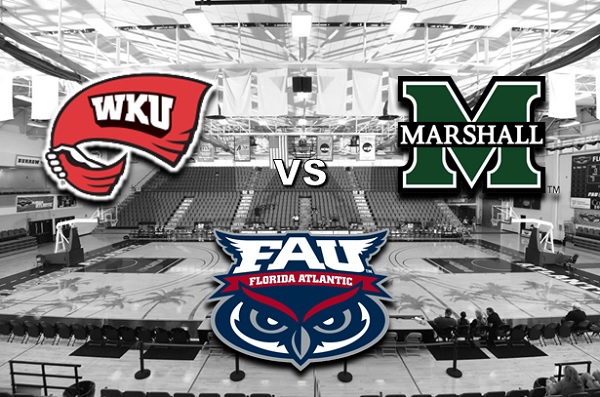 Where: The Burrow - Abessinio Court at FAU Arena

Series: The Hilltoppers own a 16-6 edge over the Owls, who also trail to the Herd 9-4 after winning the first of two season meetings.


Hilltoppers at a Glance

WKU is in the midst of what most would call a rebuilding period, and have experienced mixed results so far this season. While having to replace key losses from last year's 21-8 effort which included C-USA Player of the Year and Defensive Player of the Year, as well as NBA draftee Charles Bassey, they also saw the departures of both guard Taveion Hollingsworth (5th all-time scoring) and forward Carson Williams' 10.9 PTS and 6 RB per game.

Conversely, the regular-season 2021 C-USA East Division winners have claimed very respectable victories in that of a 71-48 rout of Ole Miss, and a double-digit downing of in state rival Louisville (82-72).

The Toppers have a trio of starters in double figures, which are led by point man Daviyon McKnight's 14.4 PPG (12th C-USA). McKnight is also solid in efficiency and ranks 3rd in the league at 48.9% FG from the floor overall with 6.47 dishes per outing (1st C-USA).

In the post the Hilltoppers are dismissing a conference best 6.35 shots per game. They also have the best shooting performance from the floor overall at 47.2%.


Herd at a Glance

Despite being the favorite, the Herd are coming off a disappointing 87-77 home loss to Rice last Saturday. Not helping matters was an inability to keep the Owls' sharp shooting duo of Carl Pierre and Travis Evee as bay, as the pair combined for 11 triples.

Pierre netted eight on the night, tying the Rice program record. Of note, WKU held Pierre to 1-of-7, and the tandem to 4-of-15, from distance in their tilt against Rice just two days prior in Houston.

Heading into the weekend, they remain winless in Conference USA at 0-4 and will be out for revenge against the Owls, who took a home court win from them 90-77 just recently on January 8th. The Herd will have to get past FIU first on Thursday, a team which they have yet to face this year.

FAU set a school record for three point production by going 16-of-21 (76.2%) in a convincing 96-67 make-up game win over Charlotte on Monday afternoon. They also registered one of their best assist-to-turnover ratios (1.7:1) on the season while taking advantage of what the 49er defense gave them and exploiting it as well.

"They simply moved the ball, attacked close-outs and made open shots", said Head Coach Dusty May. "I thought almost everyone who scored, most all their points were created off the work from their teammates."

The Owls couldn't contain the leagues 2nd best scorer in that of Jahmir Young (19.5 PPG), who dropped 30 points and was over 10 points above his season average, but they made everyone else work hard for modest success (12-of-33, 36%) and kept the game in check by doing so.

They will have to maintain that defensive pace against the Hilltoppers - a team that shoots nearly the same as they do from behind the arc, but defends it better. This is somewhat ironic considering that the opposition has taken a whopping 500 tries against WKU from downtown. For perspective, LA Tech is the closest C-USA member to that mark while seeing 79 less tries (421) and the Owls have only had the long ball tossed 329 times against them all year. 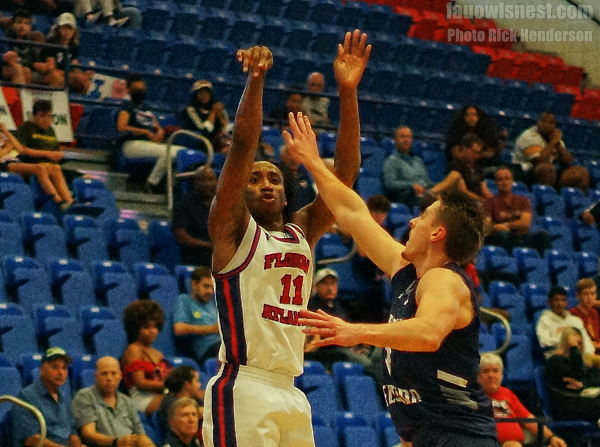 #FAU is set to take on #WKU in The Burrow! Here are your Owl Starters:

Toppers out to an early 7-4 lead at the first media stop.

FAU has been a bit sloppy to start, with two quick turnovers.

Winchester hits just his 5th triple of the season and it's a 1 point game.

The Owls trail out of the gate, the two triples and some timely makes see a close one midway through the first half. FAU needs to manage the rock a bit better, already with 5 TO's.

FAU is shooting a very good 53.8% from the floor but the Hilltoppers are at 69.2%.
E-Mail: rickthendersonjr@gmail.com

Going to have to hold off on the numbers, as usual they are wrong.
E-Mail: rickthendersonjr@gmail.com

Goldin just went up for a dunk and was flat out rejected.

Both teams are shooting well, at over 60% from the floor.
E-Mail: rickthendersonjr@gmail.com

HALFTIME - it's a (continued) close one!

Greenlee drains a 3⃣ to close the 1st period out and make for the same differential. Owls R-E-J-E-C-T a would be Topper lay-up just before the buzzer.