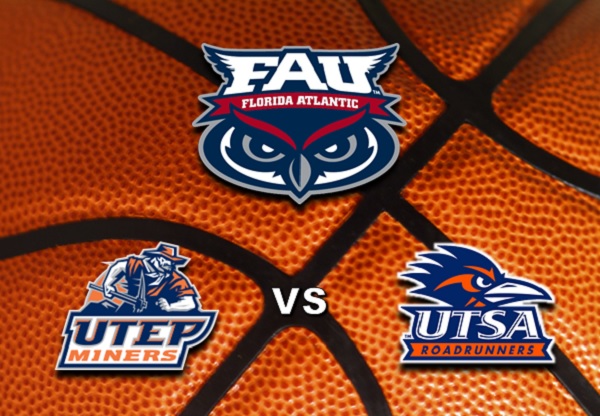 Series: Owls lead 8-6 over the Roadrunners, and the Miners have a 6-5 edge. These are FAU's first encounters against both teams this season.

Upon receiving their ranking in the AP Top 25 poll for the first time in program history, FAU made sure to show they deserved that achievement in the 76-62 victory against Western Kentucky on Monday night.

"It's great recognition for our players, our community, our fabulous University more than anything else," said head coach Dusty May. "Those of us that have been doing this for a lot of years know that if we don't continue to improve, then it'd be it'd be short lived and therefore, we have to continue to play as the aggressor as the hunter because there's a target on our back now and we have to respond."

After handling a tough stretch shooting the ball and defending the perimeter in the first half, they made significant adjustments to torch the Hilltoppers 42-29 in the second half to run away with the win.

Guards Johnell Davis, Alijah Martin, and Nick Boyd combined for 45 of the team's 76 points to dominate against the Hilltopper defense. Boyd, in particular, splashed three three-pointers for 16 total points to improve his scoring average to 9.4 points per game. 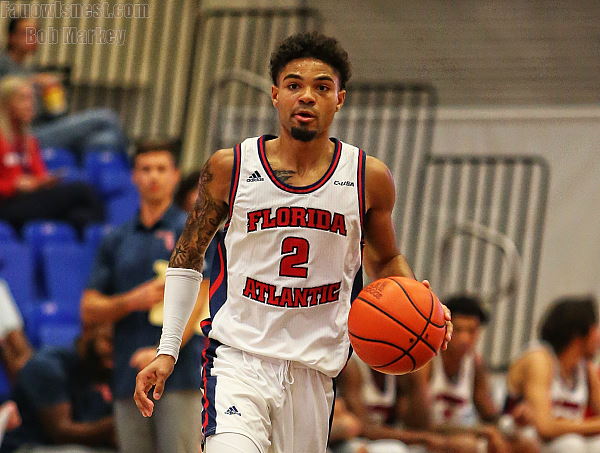 
Davis continues his astounding stretch of offensive production to the team. In the last five contests, he is averaging 18.6 points on 55% shooting from the field and 52% from downtown. Becoming a key player for the Owls at the end of games, May sees him as impactful throughout every possession at both ends of the court.

"He's so tough, he's physical. He's intelligent. He's a great driver. He came in as a great driver, he's got such a quick first step. He's a really unique isolation player that we can throw into space, and now with his perimeter shooting, he's able to take smaller guards to the block," May said. "The scoring is nice because we've needed a lot of those baskets in crunch time but there's no pressure on scoring for him because he can do so many things."

FAU must do better defending the perimeter. They have allowed 21 three-pointers against North Texas and Western Kentucky after conceding just six per game. With UTSA making eight and UTEP converting five per contest, the Owls must key in on making their opponents struggle from deep.


UTSA at a Glance

UTSA has not had a pleasant start in conference play, to say the least.

After going 6-5 against non-conference foes, the Roadrunners lost seven of their last eight and are going through a four-game losing streak, with C-USA opponents outscoring them 303-256 in that stretch.

Despite UTSA's struggles, Dusty May said FAU will still have it tough trying to get a win on their home-court.

"This is a test to us as a program and as a staff to figure out a way to just keep knocking them off one-after-one," Dusty May said. "We have such a micro-approach where we don't even talk about possession-by-possession but frame-by-frame. Every instance and every possession, we need to do what we do and trust that for over 40 minutes and that'd be more than enough."

UTSA has a certified scorer in senior guard Japhet Medor. He dropped a season-high 30 points on 11-of-28 shooting in Monday's overtime loss against Rice, so the Owls have to be cautious of his offensive aggression to keep him at bay.

Big men Vlad Goldin and Giancarlo Rosado have to match up well against Roadrunner center Jacob Germany. The 6-foot-11 senior is good at getting to the free-throw line with an efficiency of 73% this season. They must be careful with not getting in early foul trouble to prevent Germany from having a career performance.

FAU has a major advantage going against UTSA's defense, currently the worst in C-USA. As long as the Owls continue to find the open man inside the paint or outside the three-point line, they will not have a difficult time winning the first of their two matches in Texas.


UTEP at a Glance

Unlike UTSA, UTEP would be the tougher opponent for FAU this week.

The Miners have complemented themselves with a solid defense, allowing only 67 points per game as the fifth best in C-USA. Dusty May reflected on how UTEP won last season's matchup on an accidental tip-in from then-freshman center Vlad Goldin, as he looks to avenge that defeat.

"They're tough, they're physical, and they really defend at a high level," Dusty May said. "The way we lost at UTEP [last year] definitely left a sour taste in our mouth but we're so focused on UTSA right now, there's been no talk in the Miners."

What FAU should do when facing the Miners is to force them to shoot from the perimeter. UTEP is the worst three-point shooting team in C-USA, converting just 28% of their attempts as the Owls can take advantage of that in Saturday's encounter.

Even though UTEP's offense ranks second-to-last in the conference, junior guard Tae Hardy is one player the Owls must watch out for. He is averaging 18 points on 56% shooting in his last three games, including 10 three-pointers on 50% accuracy.

Taking care of the ball has to be a top priority for the Owls. UTEP tops C-USA in forcing turnovers and ranks 11th in the country at 18 per game. With FAU averaging 12, securing the ball will play a factor in who comes out of this matchup by a comfortable margin.

Member since 2022
Here's the starting lineup for your 24TH-RANKED FAU squad as they prepare to face UTSA:

Look at this place…

Member since 2022
Alijah Martin shows off his high-flying ability!

Alijah Martin THROWS DOWN THE JAM on the fast-break as FAU takes a 9⃣-point lead midway in the first half! 🔥#GoOwls🦉🏀 pic.twitter.com/gTo8lP1lcR

Rosado is just toying with their big man…

On a side note:

Weatherspoon on 🔥 so far tonight.

Weatherspoon ON FIRE with 10 PTS at the break, more than TWICE his season-average of 4.7 per game🔥Owls SUFFOCATED Roadrunners on defense, allowing 0 threes and LIMITING them to just 1 assist! Go Owls!🦉🏀

A once 20 point lead is now just SIX points.

Member since 2022
Davis coming through in the second half as Owls go on a HUGE RUN!

Johnell Davis EASES his way inside for the open lay-up, getting 6⃣ second-half points as Owls PUNISH Roadrunners offensively with a 17-0 RUN.#GoOwls🦉🏀 pic.twitter.com/XRktJWQWDs