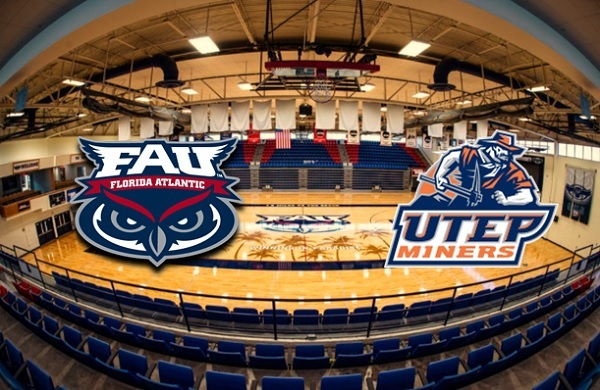 Where: Abessinio Court at FAU Arena

Series: UTEP has a slight 5-4 edge all-time against FAU, although the Owls have won three straight over the Miners.


UTEP at a Glance:

UTEP is coming off their lone series sweep of the conference slate after dismantling Florida International last weekend. The Miners' winning margin reached double-digits in both victories over the struggling Panthers.

Junior guard Souley Boum scores 28 points in Game Two's victory, including a career high 15-17 from the free throw line. He leads the conference in made free throws with 116. His 18.7 PPG places him fourth in the league in scoring.

Not far behind on the stat sheet is senior forward Bryson Williams, whose 14.7 PPG is good for eleventh-best in C-USA. Williams leads the Miners in rebounds with seven per game. He is the only Miner to average more than five per contest.

FAU returns to The Burrow following a two-game sweep to UTSA, whose stock continues to soar as the C-USA Tournament nears. FAU's losing streak now stretches to three games after the January 23 defeat to Charlotte before a two week hiatus due to COVID-19 protocols.

Last week's sweep saw scorelines of 84-80 in Game One and 86-75 in Game Two. Guard Kenan Blackshear gritted out one of his best performances of his FAU career in Friday's game with 20 points and 10 rebounds, team-highs in both categories. He followed that up on Saturday with a team-high 15 points, a stateline that was shared with forward Karlis Silins.

Forward Jailyn Ingram saw limited time last Friday night due to injury. The expectation was for him to start Saturday, but Ingram was removed from the lineup as a late scratch just minutes before the opening tip. His status for this weekend's series is unknown, although he was seen practicing with the team throughout the week as if he is good-to-go.

The Owls enter the weekend sitting in fifth out of seven in the C-USA East division standings. FAU will not be able to jump into fourth place, currently occupied by Charlotte, even if they sweep the visiting Miners.

As has happened multiple times after we have prepared for scheduled times and posted supporting information, the series has shifted from the original times to that of days later with no notification to our staff.

There are two things at play here:

2. The new dates and times present challenges for our team.

The former is the main issue, and we have made this known multiple times with no change in process. There seems to be no value recognized for what is basically a free source of promotion and publicity in a climate where no on else is even coming close to the support effort provided.

We don't have time to monitor twitter accounts for updates from the program. This is not common place in other programs but is increasingly becoming the norm for FAU.

As a result, we will not cover this weekend's series, but will post releases should they be provided.

Hopefully the value of including us and other media sources will be recognized at some point.

Just wanted to remain transparent in this decision.

The fact that FAU fails to recognize the platform that you and others have created is just baffling. You, Shane, Jack, Ryan, and Greg put more time and energy into this program than anyone else who "covers" this team. What I find absolutely insane is that we are the only school that does not have some outside source included. The other sources that cover this team come no where close to this platform that everyone here has built. No one even comes close to the way you guys cover the team and it is just plain sad that FAU fails to recognize this. Something needs to change eventually because this path they are taking is just plain incompetent.

Typical FAU. Doing the right thing evades them at times. I find myself shaking my head over so many things.

The goal, the single goal of the folks working for FAU should be to build a fan base. I would love to hear why the folks who's  job it is to do this, would not include "us".i receive more sports info from the university of Miami  because I purchased baseball tickets on their site years ago. FAU  acts small time. So frustrating as a fan. Ps, I've made posts like this for years. Please FAU , grow up and act like the big boys. Include every source in getting info out. So frustrating.

It's unfortunate the school does not recognize the value this board and it's staff bring to FAU. Probably part of a broader issue. Thanks for the note, Rick. Also, thank you to the staff, I might not comment on everything, but I read everything posted.

Aaaaaand the series is cancelled due to COVID-19 issues at UTEP.
When I'm not in school, I'm schooling the CUSA Twitter game; Follow Me Here