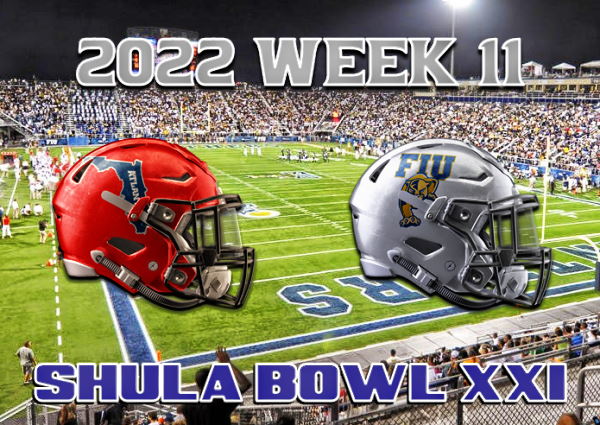 Florida Atlantic waltzed to a resounding win last season against the Panthers, reeling off a 27 point drubbing before a pleased and raucous home crowd.

The mood was very festive and the post game experience was second to none - with the usual expectation of seeing a helmet make it's way off of the Shula trophy and into the victors hands. And, in a bonus play, it was underfoot as well. 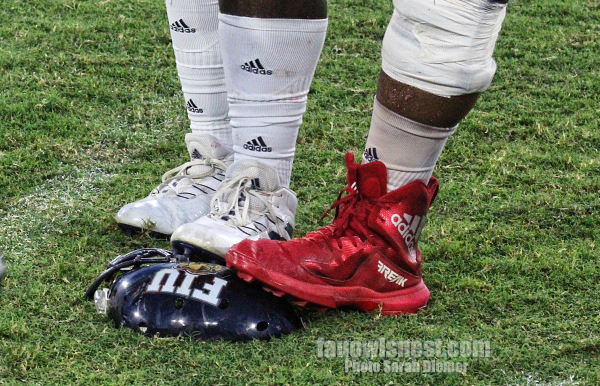 This year's contest looks to be more competitive overall but the Owls are once again favorites. Last time they visited Miami they came away a 38-19 victor, and it would be fair to take the stance that score could resemble this years outcome.

FAU's defense continued to make strides in last weekend's win over UAB despite once again being without a key starter in Eddie Williams, who saw his season come to an end the first play into a disappointing loss to UTEP. Jaylen Wester stepped up in a big way, earning the praises of the staff.

Other key members missing in week 10's win over the Blazers are expected to return and include defensive lineman Jaylen Joyner, secondary member Romain Mungin, and offensive lineman Marquice Robinson. Dorian Hinton left the contest early but is also expected back.

Destiny is very simple for the Owls, win out. And with a little help, they could make the C-USA Championship once again like the glory days not too long ago. Oh, and regardless of what would happen there in a likely meeting with UTSA, see the post season as well.

For now, the Shula Bowl should be the first step in that hopeful three step process.

"We understand the importance of this game. This game you can take the records out", said Head Coach Willie Taggart of the upcoming contest. "Conference game, rivalry game, it doesn't get any bigger than that. We're going to work our tails off this week to prepare for them."

After a three week stint against primarily rushing competition, FIU will be a shift in defensive strategy for the Owls. The Panthers are throwing nearly 6-of-10 snaps while seeing success on 62% of attempts. The Owls are giving up just under that figure to opponents on the season.

When defending the pass, FIU is surrendering completions 65% of the time and that could put more attempts on the arm of N'Kosi Perry if the Owls choose to try and exploit the figure.

Quarterback Grayson James has been a mixed since taking over for game one starter Gunnar Holmberg who was sidelined with a shoulder injury. He went 19-of-35 against North Texas this weekend in the Panther's lopsided 52-14 loss and avoided being sacked while being hurried five times on the day. He's thrown eight picks in his nine contests, but has been relatively accurate at 62%.

James like to go to team leading receiver Tyree Chambers, who made his return a couple games back after being briefly sidelined with an injury. Chambers has 507 yards in eight games and is tied for a team high four touchdowns catches with fellow receiving core member Chris Mitchell.

FIU's biggest issue on the year has been establishing a a formidable rushing attack. They check into Week 11 with the league's lowest output at just under 107 yards per game. Junior Joseph Lexington is seeing nearly 50% of FIU's running back touches while gaining 5.1 yards per attempt. James has the second most carries, but is only netting 2.8 yards in each. This has contributed towards seeing numbers which sit last amongst C-USA teams in both first downs, and 3rd down conversion percentage.

Defensively, the team is allowing 35.8 points per game, which ranks 9th in Conference USA. While rushing yards allowed is a respectable 168, opponents are passing for 283 per outing.

Linebackers Gaethan Bernadel (75) and Donovan Manuel (72), and corner back Demetrius Hill (71) account for 36% of the teams total tackle production. 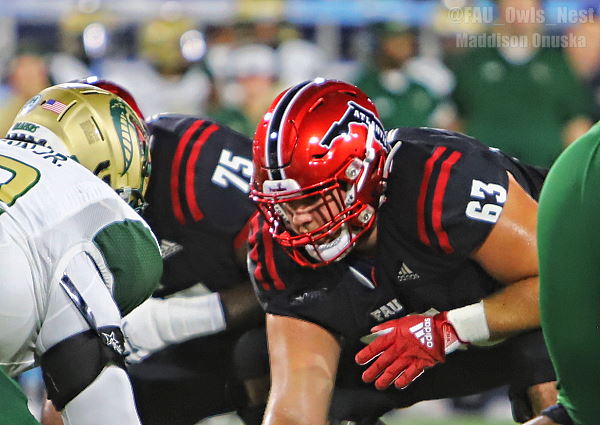 "Especially in rivalry games, they are going to try and bait you into doing something you usually don't do. The scoreboard does the talking. So at the end we'll see how it goes." FAU OL Nick Weber on upcoming Shula Bowl XXI 🦉🔥
E-Mail: rickthendersonjr@gmail.com 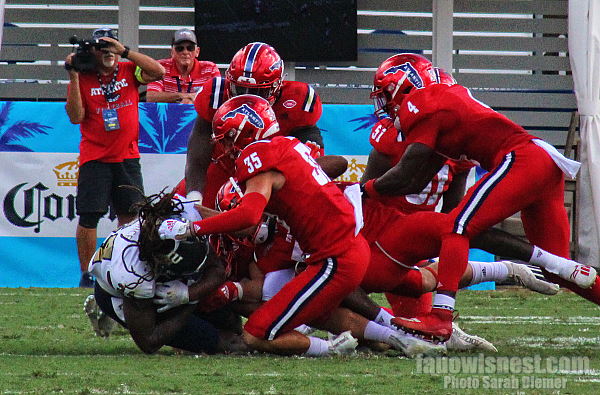 "You've got to come out and you've got to throw the punch early. Every good movie has got a good guy and a bad guy. Of course we know who the good guy is." FAU OC Brent Dearmon on Shula Bowl XXI 🔥🔥🔥
E-Mail: rickthendersonjr@gmail.com

FIU Beat Master Eric Henry with some quotes to pass along on FAU DL Evan Anderson and the game:

On Evan Anderson: He can wreak havoc all by himself and hes a really good player, said MacIntyre.

Hes quick, active, thick, a good player. Hes a DL that holds his gap and we have to be 5-for-5 against him, said Austin. 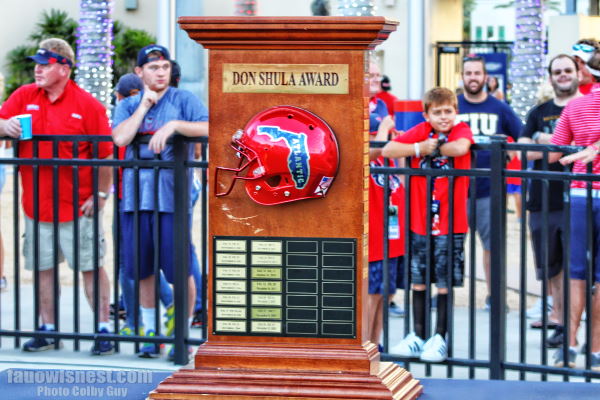 GAMEDAY! Lets do this 🦉🏆🏈
E-Mail: rickthendersonjr@gmail.com

Shula Bowl XXI is in a lightning delay.

No Jaylen Joyner for FAU, he did not travel. Dorian Hinton is dressed.
E-Mail: rickthendersonjr@gmail.com

First play of the game is an Owl INTERCEPTION!

First and goal from the Panther 4.
E-Mail: rickthendersonjr@gmail.com