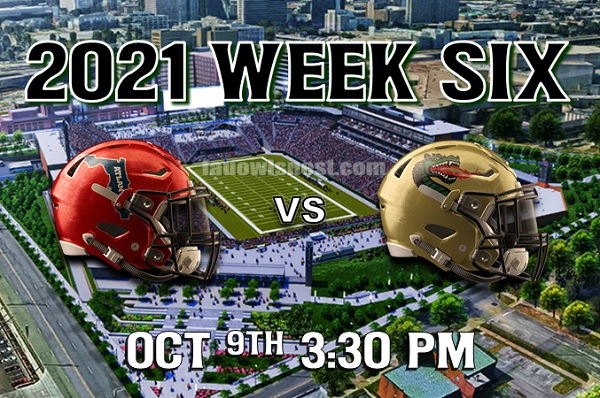 The Series: FAU currently holds a 5-2 series advantage over UAB. The last time the two sides faced off, the Owls beat the Blazers 49-6 in the 2019 C-USA Championship Game, winning their second conference title in three years.

This season has been a story of two FAU teams: the dominant Owls at home and the tough losses on the road. Being outscored 66-21 and giving up a combined 846 rushing yards in their two away contests, it's important that Florida Atlantic finds their footing offensively going into this game. It looked like they did so last week, with quarterback N'Kosi Perry leading the Owls down the field for their first opening drive touchdown of the season in their 58-21 victory over FIU.

Perry looked comfortable all game, beating the pressure that the defensive line brought to him and delivering lasers to his receivers. Wideout Je'Quan Burton [photo] had a breakout performance because of this, breaking free for big plays with his standout speed, going off for 121 yards, and a 42-yard touchdown reception from Perry on seven receptions.

Defensively, Akileis Leroy led the way for the Owls, notching eight total tackles in the Shula Bowl victory. Starter at the MACK linebacker position, Antarrius Moultrie, didn't play last week, and Leroy took full advantage of the opportunity. Coach Taggart mentioned a few defensive players were banged up from their week three loss to Air Force, so it's possible Leroy gets more opportunities with Moultrie possibly out. 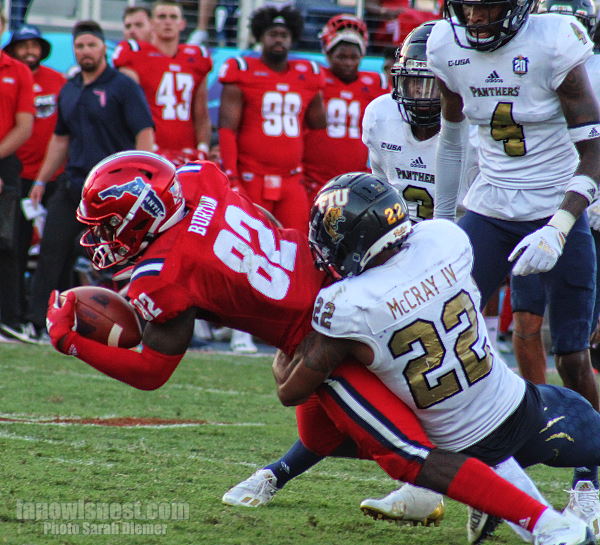 After losing in a 36-12 blowout to a Liberty Flames team led by Malik Willis, who had over 400 all-purpose yards and three touchdowns, passing for 287 of those yards, the Blazers are looking to bounce back as they enter the C-USA portion of their schedule. They played North Texas earlier on in the season, defeating them 40-6, but this is the first of a stretch of seven conference games to close out the season for UAB.

With starting quarterback Tyler Johnston III out indefinitely with an injury, junior Dylan Hopkins will take over under center. He's having the best season of his career, throwing 41-65 (63.1%) for 653 yards, seven touchdowns, and two interceptions. On the ground, the Blazers have a two-headed monster of DeWayne McBride and Jermaine Brown, who each has over 300 yards of rushing this season. Brown has more touchdowns, having three to McBride's one, while McBride has the 343-327 edge in yards.

UAB's defense is led by its safety group: Keondre Swoopes and Will Boler. Swoopes is the guy that patrols the air for the Blazers, notching two interceptions and a pass deflection on the season, while Boler is their leading tackler with 23 total tackles. Together, they mitigate a lot of big plays. The key matchup here will be to see if FAU is still able to break off for those big plays, which FAU had a lot of last week.

Here's to hoping for more trick plays down the line! Love to keep opposing defenses on their toes.

#FAU head coach @CoachTaggart on the trick play to start the game:

"We ran that play three times against our defense in practice and it worked. We figured if it worked against them it'll work in the game and it did." pic.twitter.com/e8zABNnjQm

Moultrie didn't play last week because of a suspension. Coach Taggart wouldn't say how long the suspension will be, but we hope that he'll be available for Saturday's contest in Birmingham.

#FAU HC @CoachTaggart says that Antarrius Moultrie was suspended from the Shula Bowl for "disciplinary reasons," says "there's a chance" he plays against #UAB. pic.twitter.com/mjcf4qJ52Z

More banged up players for the Owls…

#FAU Head Coach @CoachTaggart mentioned that Decarious Hawthorne and Chris Jones missed Shula Bowl XX with injury, said they will be back.

He also mentioned that @_kingjaayy was banged up after their matchup vs Air Force and played. "We appreciate his toughness," Taggart said.


Kind of got a sense in the game that the staff had ZERO respect for FIU's D. Going for 2 there early especially.

Blazers were missing 5 defensive starters in the 2nd half and had one of the backups ejected for targeting. I'm not hopeful this week unless we can get most of those guys back. FAU is a tough match-up at full strength. Blazers are 0-14 since 2017 when allowing 30+ points, Bill Clark offenses are not made for shootouts.

What's the story on that? (the missing five players)
E-Mail: rickthendersonjr@gmail.com

All undisclosed injuries. Under Bill you usually find out someone is injured when the starting lineup is announced pregame. Dyjonn Turner, Kris Moll, TD Marshall, Damon Miller, and Tyree Turner. Jaylen Key was ejected for targeting in the 2nd half, so I believe he'll miss first half this week.

This game worries me more than the rest. UAB is coming off a embarrassing loss at their home opener in their new stadium, and much like FAU did vs FIU, will be looking to make a statement against us. It will be a close game. Hopefully the staff is working on cutting down on the miscommunications and blown assignments before we travel to Birmingham.