The Owls Go For 2nd Straight Win vs Falcons 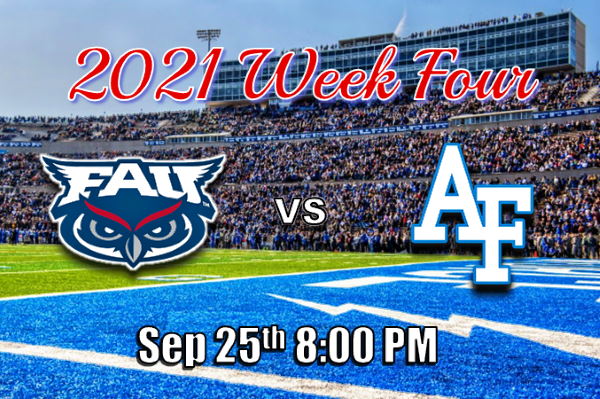 After taking a 45-14 victory over Fordham last week, the Owls are looking for their first road win of the season against the Air Force Falcons on Saturday. After beating Georgia Southern 38-6 the week prior, only allowing 139 yards on the ground, FAU is ready to face off against another triple-option offense this week.

Florida Atlantic was incredible on run defense against Fordham, holding the Rams to just 29 yards rushing. Linebacker Caliph Brice (photo below) registered a team-leading six total tackles and quarterback hurry last week. He leads the Owls with 24 tackles through three weeks of play, being a crucial piece to the linebacker core.

Safety Teja Young has also been a crucial part of FAU's defensive success, and he added to it with a pick-six that helped seal the game for the Owls last week. "I call him a real-life football player," Head Coach Willie Taggart said after the game. He plays the game the way he's supposed to." He has been crucial in all aspects of the defense, leading the team in interceptions with two while registering 21 tackles on the season.

On offense, quarterback N'Kosi Perry and wide receiver LaJohntay Wester continue to develop chemistry. Wester became the first FAU wideout to have two consecutive 100-yard games since Jovon Durante did so in 2018 and became the first Owl to have 10 receptions in a game since Harrison Bryant did in 2019 after recording 101 yards and a touchdown on 10 receptions on Sept. 18. Perry added 278 yards and two touchdowns through the air. His seven passing touchdowns on the season are more than any FAU quarterback had last season while he just stands 34 yards away from breaking Nick Tronti's team-leading mark of 905 from last season. 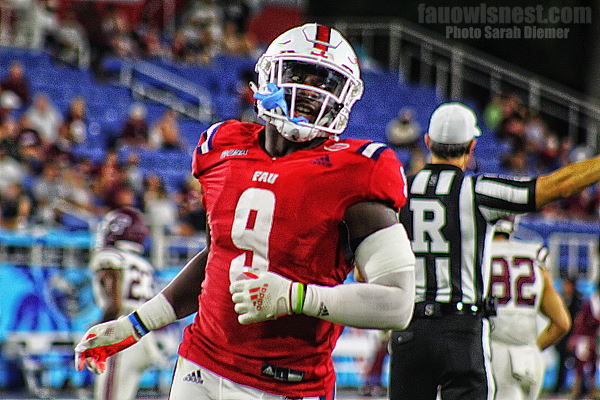 After taking hold of a 31-20 lead with a 51-yard touchdown run from junior fullback Emmanuel Michel, the Falcons gave up 14 unanswered points to let Utah State get back into the game. The Falcons would answer with two touchdowns of their own, including another rushing touchdown of over 50 yards from Michel, to go up 45-34, but Utah State would answer back with two unanswered touchdowns of their own to win the game 49-45.

Michel finished the game with 133 yards on 11 attempts, averaging 12.1 yards per carry. 105 of those 133 yards came from his two long touchdown runs. Michel has the ability to break away for a big play, but Air Force's rushing attack doesn't stop with him. The Falcons run a very run-heavy offense, being the second team in three weeks that FAU faces that run the triple-option. They currently rank 10th in the nation in rushing yards per game with 273.

Junior linebacker Thadius Blackmon is a key defensive player to watch for the Falcons. He leads the team in total tackles with 17, adding three tackles for a loss and a quarterback hurry.

Coach Taggart isn't as worried about the altitude as I am.

#FAU HC @CoachTaggart on the challenge of playing in a high altitude like Colorado next week vs #AirForce.

"I coached out in Wyoming where they had a sign that said we were 27,000 feet above sea level and it felt no different." pic.twitter.com/z4pM1qzlw2

6,035 feet is not that high.
Usually your body starts feeling something above 6,600.
I get sick around above 8,000.
Anyways, I see the team losing this game, I hope that's not the case but after this game FAU should be able to win out and finish 10-2.

#FAU HC @CoachTaggart said that T.J. Chase's No. 8 is up in the equipment room with all of the other jerseys and the decision was made ahead of the game to go with No. 18.

This team will have to be prepared to rotate a large amount of bodies in and out of the game. Even if its not as high as some place they could play if your not living there youre not use to it. So at most they can do keep hydrated and possibly travel early to run a quick run through to see how it would effect them.

Guest user
This team breathes hot humid air all day. Not an issue.

We did very well at Wyoming, just p...ed it away!


Hot and Humid air isnt the same as almost a mile above sea level especially if you aint used to it. You may end up seeing some of people using oxygen.

Oh my what a loss that was


That Wyoming loss was on the coach, not the players.