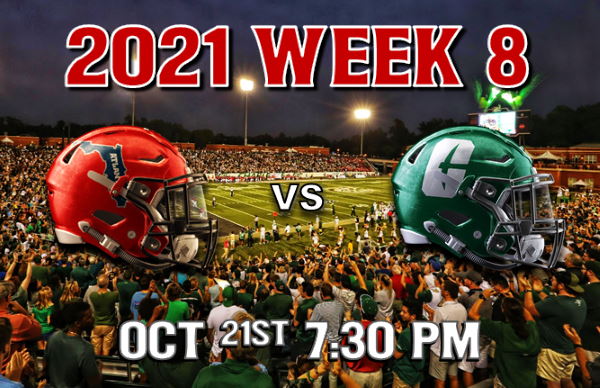 The Series: FAU currently holds a 4-2 series advantage over Charlotte. The last time the two sides faced off, the Owls beat the 49ers 21-17 in their long-awaited season opener on Oct. 3, 2020, after their first few games got canceled due to COVID-19 related issues.

After taking a 34-17 loss to UAB, the FAU Owls found themselves dealing with the injury bug. Luckily, they've had the whole bye week to recover from them, but one thing that remains is uncertainty surrounding who will start at quarterback next week in their only mid-week contest of the regular season. On Thursday, Head Coach Willie Taggart mentioned that both starter N'Kosi Perry [photo, bottom left] and backup Nick Tronti [photo, top left] were banged up and aren't 100% ready for this week's game against Charlotte. This opens up the opportunity for the young guns on the right side of the photo: Michael Johnson Jr., [photo, bottom right] and Willie Taggart Jr. [photo, top right]. 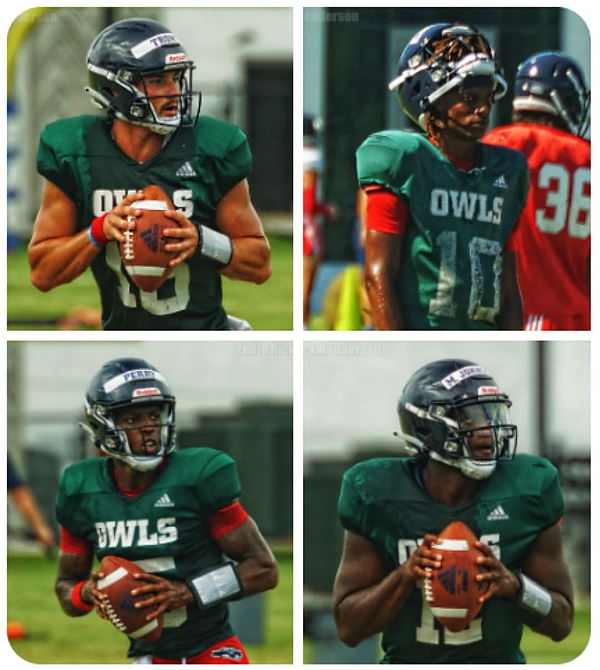 In the unlikely the event that both Perry and Tronti can't play, Michael Johnson Jr. would probably get the call for the Owls. He transferred from Penn State University this past winter after not playing in 2019 and 2020. Over his high school career, he threw for over 7,300 yards and 86 touchdowns, rushed for 3,463 yards and 48 touchdowns, and held a Power 5 starter projection from 247 Sports.

On defense, FAU is in danger of being without safety Jordan Helm, who missed practice last week with an injury. He is currently second on the team in tackles with 42. Armani-Eli Adams is a player who has been impressive in his absence, according to Coach Taggart, as he had three tackles after Helm left the game.

The team will enjoy favorable weather for the contest, with clear skies and temperatures in the mid to upper 60's forecast to be on tap for the night.

With the 49ers also coming into this week off of a bye week, the last time we saw Charlotte in action was on Friday, Oct. 8, when they defeated the FIU Panthers 45-33. Quarterback Cam Reynolds threw 22-28 (78.6%) with 199 yards and four touchdowns while running back Shadrick Byrd led the team in rushing with 80 yards on 14 carries.

Reynolds has been the star of the show for the 49ers, throwing 106-162 (65.4%) with 1,314 passing yards, 15 touchdowns, and three interceptions. He also has another 199 rushing yards and three touchdowns on the ground. He has two targets of over 400 yards six weeks through the season: Grant DuBose and Victor Tucker. DuBose leads the way with 466 yards and four touchdowns on 29 receptions, while Tucker follows with 432 yards and two touchdowns on 31 receptions.

On the defensive end, the 49ers are led by linebacker Tyler Murray, who leads the team with 43 tackles, adding a forced fumble and an assisted sack. Defensive end Markees Watts has been crucial at getting to the quarterback as well, notching five sacks for 28 yards while adding 39 sacks, which is good for second behind Murray.

Hoping for a win but last weeks effort left a very sour taste in my mouth. I just dont believe Taggart can win on the road against semi decent competition.

Earlier in the season we would have been 14 point favorites, but we have slipped a bit and they have gotten better.
E-Mail: rickthendersonjr@gmail.com

Perry and Tronti are trending towards being available this week: they will be practicing today.

#FAU head coach @CoachTaggart says that QBs NKosi Perry and Nick Tronti and S Jordan Helm are all going to be participating in practice this week after resting during the bye week. pic.twitter.com/JVQ89M1rzr— FAU Owl's Nest (@FAU_Owls_Nest) October 17, 2021

This is a game we need to win, no excuses. It doesn't "feel" like a game we will win in the early Taggart era, so need to show me something here.

With Marshall getting hot and a already bowl qualified UTEP coming to town next week the Owls have to play nearly perfect against Charlotte which is playing good football. This team has not played well on the road  this season and the bye week came at a perfect time for the team. A time to figure out the road woes and a time to get healthy. Look for this team to come out hopefully firing on all cylinders Thursday.

Stoops says that Jordan Helm IS trending towards playing this week after he missed all of last week's practices with an injury. He just started participating in drills yesterday.

"Jordan practiced well yesterday and he's on track [to play on Thursday.] We're excited he's back and he's a part of our gameplan this week." pic.twitter.com/11jAawqUFC— FAU Owl's Nest (@FAU_Owls_Nest) October 18, 2021

Coach is saying that Perry is good to start Thursday.

#FAU HC @CoachTaggart on if the #CUSA to #AAC buzz has caused a shift in focus:

"I don't know what distraction you're talking about. Our guys have been locked into #Charlotte since we got off the plane from #UAB. There haven't been any distractions that I know of." pic.twitter.com/dMDM4a1Gmm